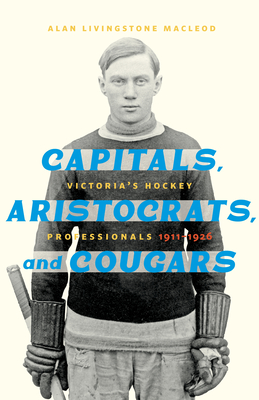 A fascinating and in-depth look at Victoria's largely unknown professional hockey players in the early twentieth century, and the historical context in which they played.

For most hockey fans hailing from Canada's westernmost province, the sport's most coveted prize, the Stanley Cup, has remained frustratingly elusive for nearly a century. But what many people do not know is that the west coast, and in particular the city of Victoria, was once a hockey mecca, where superstars flourished, Hall of Famers were made, and big victories--yes, even the Stanley Cup of 1925--were won.

Capitals, Aristocrats, and Cougars is a deep dive into the world of professional hockey in Victoria from 1911 to 1925, an era that saw forty-nine men take their turns in one of the city's newly minted teams. It was also an era of unprecedented social, economic, and political change, a period that spanned the First World War and redefined Canada's national identity. With meticulous research and encyclopedic knowledge, author, historian, and consummate hockey fan Alan Livingstone MacLeod chronicles the key players, coaches, arena builders, and team visionaries who contributed to this long-forgotten chapter of hockey history, and puts them all in the context of what was going on in the world at the time. This in-depth account is sure to delight history buffs and hockey fans alike.