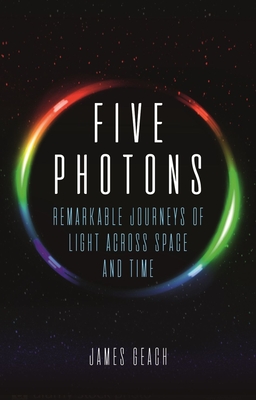 Have you ever wondered what is the most distant source of light we can see, or how a star shines? Did you know that black holes can blaze like cosmic beacons across intergalactic space, and that ancient radio waves might herald the ignition of the very first stars? Have you ever thought about what light really is? Five Photons explains what we know about the universe through five different journeys of light across space and time. They are tales of quantum physics and general relativity, stars and black holes, dark matter and dark energy. Let yourself be swept away on a journey of discovery towards a deeper understanding of the cosmos.

James Geach is professor of astrophysics in the Centre for Astrophysics Research at the University of Hertfordshire.

"Light illuminates cosmic origins and decodes quotidian realities. But what is it? This deft primer by astrophysicist Geach captures the elusive electromagnetic wave in five processes. His meditation on ‘old’ light takes us back to the singularity: the 'cosmic seed' that expanded into the Big Bang. A study of starlight plunges us into the seething stellar surface. We peruse dark energy, radio waves and quasars—beacon-like galaxies in which supermassive black holes feed off interstellar gas and release vast amounts of energy. A masterclass in elucidating hard science with elegance and brevity."
— Barbara Kiser

"Light permeates almost everything around us. It is the primary way in which we communicate and with which we try to understand the Universe. Light is the central theme of Geach’s book. After an introductory chapter on what light is, the book identifies five different sources of light that are key probes of the cosmos. This framework allows Geach to cover everything from the cosmic microwave background, to stars, dark energy, black holes and the epoch of reionization. No equations are to be seen and the style is conversational, making this book a perfect entryway to anyone interested in learning a bit more about the inner workings of the Universe."
— Nature Astronomy

"What makes Five Photons different . . . is the depth that Geach goes to—not in a mathematical sense, but in describing subtleties of the work of astrophysicists and cosmologists that popular science titles usually gloss over. . . . Think of it as a sequel to A Brief History of Time that explains some of the real detail of what has been discovered and brings in factors cosmologists have to consider that you won’t see anywhere else in a popular science title."
— Brian Clegg

“The book is intended for the general reader and is written in a colloquial style which is easy to follow, and it comes across to me as being right up-to-date in describing current cosmological awareness. . . . Five Photons leaves the interested laymen well-briefed about current state-of-the-art astrophysics. . . . The author has provided a copious amount of information about the Universe hinged upon photons and spectroscopy and has done so in a style which is both easy and enjoyable to read.”
— Observatory Magazine

“In Five Photons, astrophysicist Geach serves as our guide on this cosmic voyage. Geach explains five tales of fascinating astrophysical processes that propel light across space and time, tales of quantum physics and general relativity, stars and black holes, dark matter and dark energy. Sweeping us away on electromagnetic waves, Five Photons is a journey of discovery toward a deeper, more enlightened understanding of this breathtaking universe.”
— Fahrenheit: A Pop Science Book Club

"The writing is excellent, and Geach has a real gift for composing elegant analogies—a skill that matches his ambition to survey a deep array of astrophysical ideas. For example, the first 'photon' of the title is the cosmic microwave background (CMB). Beyond explaining the origin of the CMB and how it was first detected, the author delves into the anisotropies found in the CMB, what caused them, and what they reveal about the earliest eras of the universe. Other topics include starlight, dark energy, general relativity, expansion of the universe, how black holes can 'shine,' and the search for the very first generation of stars and galaxies. Five Photons is absorbing and rewarding throughout."
— Choice

"There are a thousand-and-one tales to be told by the photons from space, and Geach treats us to five of the most fascinating. . . . Geach's tour-de-force in explaining complex science is making light work (pun intended!) of explaining the Sachs-Wolfe effect. If that's intriguing you . . . buy a copy of this excellent book!"
— Popular Astronomy

“With his elegant, supremely clear writing, Geach has succeeded at creating both a state-of-the-art cosmic overview and a rather wonderful meditation on the nature of our reality.”
— Caleb Scharf, author of "The Zoomable Universe"

“Geach’s beautiful cosmic biography takes readers on a sweeping tour of all that was, is, and ever will be. Five Photons is as elegant as it is enlightening.”
— Lee Billings, author of "Five Billion Years of Solitude"