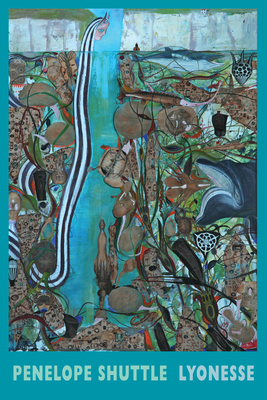 The submerged land of Lyonesse was once part of Cornwall, according to myth and the oral tradition, standing for a lost paradise in Arthurian legend, but now an emblem of human frailty in the face of climate change. And there was indeed a Bronze Age inundation event which swept the entire west of Cornwall under the sea, with only the Scilly Isles and St Michael's Mount left as remnants above sea-level. Lyonesse was also Thomas Hardy's name for Cornwall where Penelope Shuttle has lived all her adult life, always fascinated by the stories and symbolic presence of Lyonesse. After seeing the Scilly Isles from a small plane at a low altitude - flying over the Wolf Lighthouse -- and then visiting the recent Sunken Cities exhibition at the British Museum, imagination and memory played their part in joining the Lyonesse dots together for her, prompting what she calls 'a spontaneous inundation of approaches to the theme, images, soundings of Lyonesse'. As she writes in a preface to this book: 'The universality of loss, both of physical cities and of the human experience erased from the record, enhanced the resource of Lyonesse in my writing. Lyonesse is a place of paradox. It is real, had historical existence. It is also an imaginary region for exploring depths. It holds grief for many kinds of loss... The poems seek re-wilding of a city where human loss interconnects with mythic loss; myth is rooted in the real.' The second part of this book - New Lamps for Old -- is a collection of poems she needed to write in coming up for air from the watery depths of Lyonesse, to find ways to begin again, to find meaning in life after bereavement. The 'old lamps' of a former life have been extinguished, leaving darkness. Her challenge was to find 'new lamps' to illuminate and give meaning to life. Lyonesse is a fluid magical world. The poems of New Lamps for Old are concerned with earth, air and fire. Both collections share allegiance with the fifth element, the spirit.

Penelope Shuttle has lived in Cornwall since 1970, is the widow of the poet Peter Redgrove. Her first collection of poems, The Orchard Upstairs (1981) was followed by six other books from Oxford University Press, The Child-Stealer (1983), The Lion from Rio (1986), Adventures with My Horse (1988), Taxing the Rain (1994), Building a City for Jamie (1996) and Selected Poems 1980-1996 (1998), and then A Leaf Out of His Book (1999) from Oxford Poets/Carcanet, and Redgrove's Wife (2006) and Sandgrain and Hourglass (2010) from Bloodaxe Books. Redgrove's Wife was shortlisted for both the Forward Prize and the T.S. Eliot Prize in 2006. Sandgrain and Hourglass is a Poetry Book Society Recommendation. Her retrospective, Unsent: New & Selected Poems 1980-2012 (Bloodaxe Books, 2012), drew on ten collections published over three decades plus the title-collection, Unsent. Her later collections from Bloodaxe are Will you walk a little faster? (2017) and Lyonesse (due 2021). Heath, a collaboration about Hounslow Heath with John Greening, was published by Nine Arches in 2016. Heath, a collaboration about Hounslow Heath with John Greening, was published by Nine Arches in 2016. First published as a novelist, her fiction includes All the Usual Hours of Sleeping (1969), Wailing Monkey Embracing a Tree (1973) and Rainsplitter in the Zodiac Garden (1977). With Peter Redgrove, she is co-author of The Wise Wound: Menstruation and Everywoman (1978) and Alchemy for Women: Personal Transformation Through Dreams and the Female Cycle (1995), as well as a collection of poems, The Hermaphrodite Album (1973), and two novels, The Terrors of Dr Treviles: A Romance (1974) and The Glass Cottage: A Nautical Romance (1976).