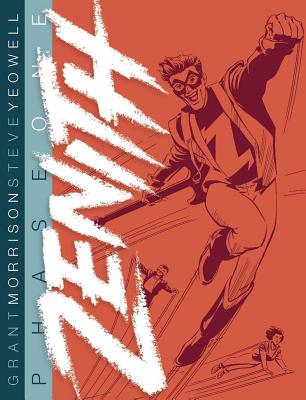 Zenith Phase 1, Grant Morrison's first comics masterpeice with unforgetable art by Steve Yeowell, has been unavailable to trade for twenty years, but is published again here in a stunning new hardback edition. The all time classic is back Berlin, 1945: The allies unleashed the second world war hero Maximan upon the German super soldier Masterman. Maximan's defeat was only kept secret by the nuclear bomb which destroyed both men. Forty-plus years later, and twenty years after a generation of '60s British superpowered heroes came and went, the teenage pop star Zenith is the only superhuman left - and his only interest in women, drugs, alchohol and fame. So when he is contacted about the threat from the many-angled ones and the impending destruction of our world, his first reaction is to steer well clear. But the superhumans of the past have other plans...

Grant Morrison has written many bestselling graphic novels, including Batman: Arkham Asylum, Doom Patrol, Animal Man, Flex Mentallo and The Invisibles and has established himself as one of the modern masters of the medium. Steve Yeowell is justly famous or his work on Zenith, but he has illustrated many further 2000 AD stories, including Red Seas, Judge Anderson, Devlin Waugh, Sinister Dexter and many more.