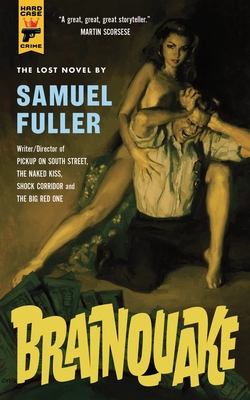 The bagmen who transport money for organized crime live by a set of rules: no personal relationships, no ties, no women…and never, ever look inside the bag you’re carrying. Paul Page was the perfect bagman, despite suffering from a rare brain disorder. But that ended the day he saw a beautiful Mob wife become a Mob widow. Now Paul is going to break every rule he’s lived by–even if it means he might be left holding the bag.

Crime reporter, freelance journalist, pulp novelist, screenwriter, World War II infantryman—Samuel Fuller (August 12, 1912 – October 30, 1997) was a jack of all trades before the high-school dropout directed his first film at age thirty-six. But once he was contacted by Poverty Row producer Robert L. Lippert, a fan of his writing, Fuller was turned on to cinema—his true calling. A singularly audacious visionary of the B-movie variety, Fuller would make muscular, minuscule pictures, starting with the one-two-three punch of I Shot Jesse James, The Baron of Arizona, and The Steel Helmet—the last a raw Korean War saga that was one of the few films of the period to address racism in America. Soon after, Fuller was scooped up by Twentieth Century Fox, but he was able to maintain his purposefully crude, elegantly stripped-down style and teeth-bared cynicism for such studio efforts as Fixed Bayonets! and Pickup on South Street. Eventually, Fuller returned to independent filmmaking, and in the sixties (after his artistic cred had been given a shot in the arm by the French New Wavers’ embrace of him as a major stylistic influence), he directed two of his most acclaimed titles, the pulpy and profound Shock Corridor and The Naked Kiss, both corrosive satires of American culture. Even in his career’s twilight, Fuller didn’t shy away from controversy: his early eighties social horror film White Dog was shelved by the studio for more than a decade due to its provocative, bloody investigation of American racism.

"If you love Fuller’s movies, you will love this pulp story about a physically sick bagman for the mob who makes the most deadly mistake of all: he falls in love." - Book Reporter

"Reading Brainquake, you can see why moviemakers like Quentin Tarantino and Martin Scorcese admired Fuller." - Blogcritics

"Fuller plays with the unique capacities and poetics of language in often surprising and even beautiful ways amidst the stunning grit of his subject matter." - Film School Rejects

"There’s a melodramatic inevitability to everything as well as an air of unpredictability. By the end, there are no heroes or villains, just those with the ability to play the game (and people)." - Awards Circuit

"BRAINQUAKE is essential reading for all crime fiction fans and another reason to celebrate this unique and gifted yarn-spinner." - Bookgasm

"HIGHEST RECOMMENDATION POSSIBLE.  Listen up: I devoured BRAINQUAKE in two sittings.  It was that riveting, that compelling, that interesting." - Lunch.com

"It’s the beauty of both Brainquake and Fuller as an artist—the ugly, savage, lingering fear which keeps Brainquake teetering and readers salivating for more." - Cinema Sentries

"This is Fuller at his best and worth a read if you’re a fan of his work or a fan of great crime novels. It’s uncompromising and hard hitting; you will not want to put this book down." - City of Films

"If you’re a fan of this pulp genre, this will be one solid read." - Retrenders

"If you enjoy a good crime story with some twists and turns give Brainquake a look-see." -  Pop Cults

"Brainquake is a good read and one well worth checking out for fans of old mafia films or fans of the Hard Case Crime novel series." - BGG

""Brainquake" is crackerjack entertaining, but also skillfully measured and constructed." - The Playlist

"It’s a Saturday matinee and pulp fiction in the purest sense, although there is a depth to it, particularly when Fuller is riffing on his characters." - Lit Reactor

"It’s uncompromising and hard hitting; you will not want to put this book down." - City of Films

"A word to the wary noir aficionado: If you start this book, don’t plan to do anything else for a while. Like sleeping." - News OK

"The dialogue blasts out  like gunshots and his tabloid inspired prose has the punchy feel of his editing. The emotions are raw and heightened. Everything is heightened, yet retains the truth in its main characters. Brainquake is full on Fuller." - Mystery People

"Brainquake is exactly what it needs to be; there is mystery, crime, intrigue, and plot twists a plenty." - Pop Cults

"Well worth checking out." - BGG After Dark

"You will not want to put this book down until the final bloody pages score across your brain pan. While I hesitate to ever proclaim a novel perfect, Brainquake makes quite the violent case for the designation." - Mania

"Hard Case Crime has given us a welcome return to the world and mind of Samuel Fuller, reminding us how pleasurable such straightforward, effective, dynamic storytelling can be." - Deep Focus

"It's a little over 300 pages of can't-put-it-down writing, with so many of the descriptions and hard-hitting scenarios evoking cinematic imagery. Indeed, Brainquake reads like one of Fuller's edgy films from the 1950s (especially Pickup on South Street or The Naked Kiss), and has an air of fatalism and shuddering frustration that cannot help but feel biographically inspired by his White Dog troubles. For those interested in, or downright fanatical about, Fuller, Brainquake offers something new from an artist whose new material has subsided long ago. Hard Case Crime has given us a welcome return to the world and mind of Samuel Fuller, reminding us how pleasurable such straightforward, effective, dynamic storytelling can be." - Deep Focus

"BRAINQUAKE is a noir gem, published on what would have been the author’s 102nd birthday. It is easily one of the best books Hard Case has released in its 10-year history and has one of the greatest first lines of any noir novel I have ever read..." - Book Reporter

"The bravura opening is a knockout...Fuller fans will find it hard to resist." -- BOOKLIST

"The writing is pulpy and the violence brutal...Fuller explodes a few surprises to keep the plot unpredictable, and his mordant asides on crime and corruption elevate this tale above much standard genre fare." -- PUBLISHERS WEEKLY

"A real throwback of a crime novel, full of violence and colorful dialog...exciting and unpredictable." -- LIBRARY JOURNAL

"The writing is pulpy and the violence brutal, but Fuller explodes a few surprises to keep the plot unpredictable, and his mordant asides on crime and corruption elevate this tale above much standard genre fare." - Publisher's Weekly

"One guess as to which notable deceased writer-director-philosopher raconteur combined these ingredients into the delightfully dizzying, invigorating novel Brainquake, a beach book that storms the reader’s defenses like the Normandy invasion (which gets a shout-out here). No, this ain’t  James Ivory, pal: it’s Sam Fuller at full blast, relentlessly advancing a multipronged
narrative while throwing restraint to the wind and leaving a Proust-load of movie-madeleines strewn in his wake. (Picture a pastry truck in a 10-car pileup after a French Connection–like chase.)" - Film Comment magazine