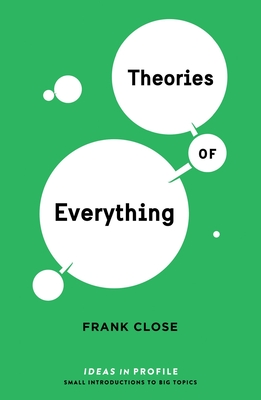 By Frank Close
Unavailable. Orders will be auto-cancelled.

Ideas in Profile: Small Introductions to Big Topics Physicist Frank Close takes the reader to the frontiers of science in a vividly told investigation of revolutionary science and enterprise from the seventeenth century to the present. He looks at what has been meant by theories of everything, explores the scientific breakthroughs they have allowed, and shows the far-reaching effects they have had on crucial aspects of life and belief. Theories of everything, he argues, can be described as those which draw on all relevant branches of knowledge to explain everything known about the universe. Such accounts may reign supreme for centuries. Then, often as a result of the advances they themselves have enabled, a new discovery is made which the current theory cannot explain. A new theory is needed which inspiration, sometimes, supplies. Moving from Isaac Newton's work on gravity and motion in the seventeenth century to thermodynamics and James Clerk Maxwell's laws of electromagnetism in the nineteenth to Max Planck's and Paul Dirac's quantum physics in the twentieth, Professor Close turns finally to contemporary physics and the power and limitations of the current theory of everything. The cycle in which one theory of everything is first challenged and then replaced by another is continuing right now.

Frank Close is the author of 15 popular books about physics, including the award winning Half-Life, a biography of Bruno Pontecorvo, Antimatter, The Infinity Puzzle , and Very Short Introductions to Nothing and Particle Physics. He is professor of physics at Oxford University and a former Head of Communications and Public Education at CERN. In 2014 he was awarded the Michael Faraday Award of the Royal Society for science communication, and is the only scientist to have won an Association of British Science Writers' Prize on three occasions.