Germanicus: The Magnificent Life and Mysterious Death of Rome's Most Popular General (Hardcover) 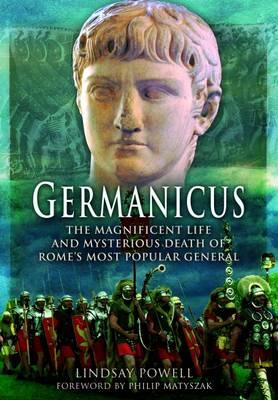 By Lindsay Powell
Unavailable. Orders will be auto-cancelled.

Germanicus (a.k.a. Germanicus Iulius Caesar) was considered by Romans as one of their greatest military heroes. His untimely death, in suspicious circumstances, ended the possibility of a return to a more open republic and ambitions for the outright conquest of Germania Magna (Germany). This, the first modern biography of Germanicus, is in parts a growing-up story, a history of war, a tale of political intrigue and a murder mystery. It is a natural sequel to the author's first book, Eager for Glory, which discussed the life of Germanicus' natural father, Nero Claudius Drusus, for the first time.

Born in 15 BC, Germanicus grew up to be a skilled diplomat and bold soldier. Married to the granddaughter of Augustus (by whom he fathered the future Emperor Caligula) and responsible for avenging Rome's humiliating defeat at the Teutoburg Forest through victory at Idistaviso (AD16) and the recovery of one of the lost standards, his reputation and popularity were immense. The Emperor Tiberius, his adoptive father, granted him a triumph, but refused to let him complete the reconquest of Germania, sending him instead to command in the East. Did Tiberius feel jealous and threatened?

Germanicus fortunes waned when he fell out with one of Tiberius appointees, Piso. His death in mysterious circumstances, aged 34, brought great outpourings of public grief and anger, with many suspecting murder on the orders of Tiberius. Piso was put on trial but he committed suicide - or was he murdered? - before the senate could reach a verdict.