Collision of Empires: The War on the Eastern Front in 1914 (Hardcover) 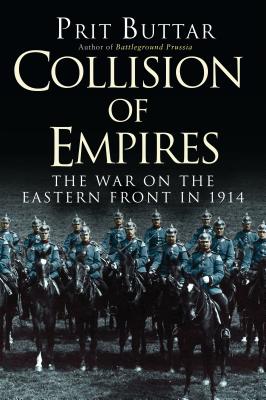 Imperial Germany, Hapsburg Austria-Hungary, and Tsarist Russia clashed on a scale greater than the Western Front campaign to the Marne and the Race to the Sea in 1914.

Drawing on first-hand accounts and detailed archival research, this is a dramatic retelling of the tumultuous events of the first year of World War I on the Eastern Front, with the battles of Tannenberg and the Masurian Lakes in East Prussia, followed by the Russo-Austrian clashes in Galicia and the failed German advance towards Warsaw.

With the centenary of the start of World War I in 2014, Collision of Empires is a timely re-discovery of the bitter fighting on this forgotten front. The fighting that raged from East Prussia, through occupied Poland, to Galicia and the Carpathian Mountains was every bit as bloody as comparable battles in Flanders and France, but - with the exception of Tannenberg - remains relatively unknown. As was the case in the West, generals struggled to reconcile their pre-war views on the conduct of operations and how to execute their intricate strategic plans with the reality of war. Lessons were learned slowly while the core of trained personnel, particularly officers and NCOs, in the armies of Germany, Austria-Hungary and Russia suffered catastrophic losses throughout 1914. Inadequacies in supply and support arrangements, together with a failure to plan for a long war, left all three powers struggling to keep up with events. In addition, the Central Powers had to come to terms with the dreaded reality of a war on two fronts: a war that was initially seen by all three powers as a welcome opportunity to address both internal and external issues, would ultimately bring about the downfall of them all. Prit Buttar, author of Battleground Prussia, provides a magisterial account of the chaos and destruction that reigned when three powerful empires collided.

Prit Buttar studied medicine in Oxford and London before joining the British Army as a doctor. After leaving the army, he has worked as a GP (General Practitioner), first near Bristol and now in Abingdon, Oxfordshire. He is extensively involved in medical politics, both at the local and national level, and serves on the GP's Committee of the British Medical Association. He appears from time to time on local and national TV and radio, speaking on a variety of medical issues. He contributes regularly to the medical press. An expert on the Eastern Front during both world wars, he previously wrote the critically acclaimed Battleground Prussia: The Assault on Germany's Eastern Front 1944-45 (Osprey 2010). The author lives in Oxford, England.