Cut Me In (Paperback) 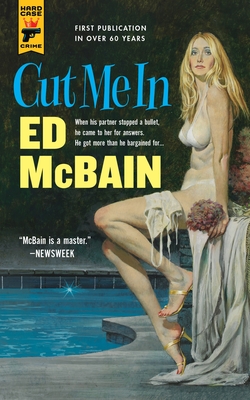 By Ed McBain
$9.95
Backordered. Place an order and we will let you know when to expect your book.

When a Man’s Partner is Killed,
He’s Supposed to Do Something About It.

Maybe no one liked Del Gilbert a whole lot, not the men he ruthlessly did business with, not the women who discovered his other lovers, not even his partner in the Gilbert and Blake literary agency – me. But when I found him shot to death on the floor of his office, I had no choice. I had to track down the person responsible. And not just to lay Del to rest, either. Next to his body, the office safe was wide open, and a contract worth millions was missing...

Ed McBain, AKA Evan Hunter, wrote more than eighty novels, including the influential “87th Precinct” series, the longest-running series of crime novels in history. His books have sold more than 100 million copies. In 1986, he was named a Grand Master by the Mystery Writers of America, the organization’s highest honor, and in 1998 he became the first American to receive the British Crime Writers’ Association’s highest award, the Cartier Diamond Dagger.

"The the plot twists are quite delightful, but the way McBain wraps it all up at the end is truly elegant. No loose ends, no unexplained tangents, and no characters who didn’t have anything significant to contribute to the story. As lean as it is, it feels just as rich as a more detailed book, with all the sights and smells of a post-war New York rising to new levels of affluence, where social and moral attitudes are changing faster than Buick and Cadillac designs." - Crime Fiction Lover

"I enjoyed the hell out of it not because it's a masterpiece but because it is one of those books that remind me of where so many writers of my generation, certainly me, came from. And the `50s  ambience if just right." - Ed Gorman

"CUT ME IN is a required addition to the library of any Ed McBain fan. Once again, Hard Case Crime has shown why they do essential work. It is easy to imagine these books lost forever without Charles Ardai searching them out." - Book Reporter

“Some writers know how to suck you right in from the first page.  Take the late author Evan Hunter aka Ed McBain.” -  Borg.com