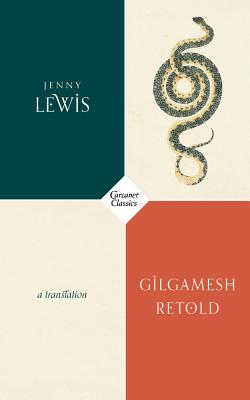 Jenny Lewis relocates Gilgamesh to its earlier, oral roots in a Sumerian society where men and women were more equal, the reigning deity of Gilgamesh’s city, Uruk, was female (Inanna), only women were allowed to brew beer and keep taverns and women had their own language—emesal. With this shift of emphasis, Lewis captures the powerful allure of the world’s oldest poem and gives it a fresh dynamic while creating a fast-paced narrative for a new generation of readers.

Jenny Lewis is an Anglo-Welsh poet, playwright, songwriter, children’s author and translator who teaches poetry at Oxford University. She trained as a painter at the Ruskin School of Art before reading English at St Edmund Hall, Oxford. She has worked as an advertising copywriter and a government press officer for, among others, the Equality and Human Rights Commission. She has also written children’s books and plays and co-written, with its creator, Kate Canning, a twenty-six-part children’s TV animation series, James the Cat. Her first poetry sequence, When I Became an Amazon (Iron Press, 1996) was broadcast on BBC Woman’s Hour, translated into Russian (Bilingua, 2002) and made into an opera with music by Gennadyi Shizoglazov which had its world premiere with the Tchaikovsky Opera and Ballet Company in Perm, Russia, November 2017. Since 2012, Jenny has been working with the Iraqi poet Adnan al-Sayegh on an award-winning Arts Council-funded project, "Writing Mesopotamia," which aims to build bridges and foster friendships between English and Arabic-speaking communities. Her work for the theatre includes Map of Stars (2002), Garden of the Senses (2005), After Gilgamesh (2011) and, with Yasmin Sidhwa and Adnan al-Sayegh, Stories for Survival: a Re-telling of the 1001, Arabian Nights (2015). She has published two collections with Oxford Poets/Carcanet, Fathom (2007) and Taking Mesopotamia (2014). Jenny is currently completing a PhD on Gilgamesh at Goldsmiths.