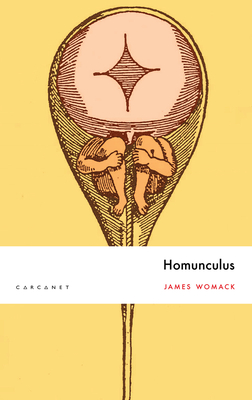 Homunculus is a long poem from award-winning poet and translator James Womack, based around the Elegies of the Roman poet Maximian. The last of the Roman poets, Maximian wrote in the sixth century, after the fall of the Western Roman Empire; critics have called his Elegies 'one of the strangest documents of the human mind', and W.H. Auden singled him out as a 'really remarkable poet'. Womack's versioning of the Elegies shows how this harsh poem of sex and old age can speak to our own contemporary, collapsing world.

James Womack was born in Cambridge in 1979. He studied Russian, English and translation at university, and received his doctorate, on W.H. Auden's translations, in 2006. He lived in Madrid from 2008 to 2017, and now teaches Spanish and translation at Cambridge University. He is a freelance translator from Russian and Spanish, and helps run Calque Press, which concentrates on poetry, translation and the environment. His debut collection of poems, Misprint, was published by Carcanet in 2012, and On Trust: A Book of Lies came out in 2017.