From the Oven to the Table (Hardcover) 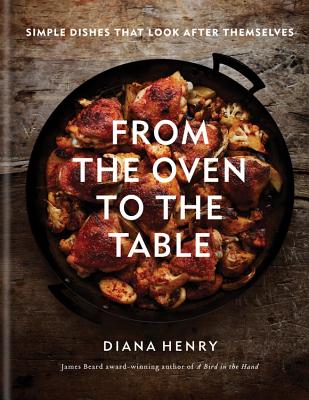 2020 James Beard Award Nominee
NAMED ONE OF FALL'S BEST COOKBOOKS BY The New York Times, Eater, thekitchn, Epicurious, Chowhound, Completely Dorrie
"I can't help but envisage this book in kitchens up and down the country, absolutely a-flutter with post-it notes, not just to signal those recipes earmarked for cooking in the future, but as a way of marking those already eaten with unflurried joy." Nigella Lawson
"Henry's book will inspire you, even on a Wednesday night." Eater
Let the oven do the work with this easy-going collection of full-flavored dishes from Diana Henry.
All of the recipes in this book can be cooked in one dish or pan. You simply prep the ingredients then pop them in the oven to roast while you get on with your life. From quick after-work suppers and light veggie meals to more substantial feasts to feed friends, these recipes are packed with full-on flavor.
Diana includes recipes such as Spatchcock Chicken with Chilie, Garlic and Oregano Aioli, Cod with Chorizo, Tomatoes, Olives and Saffron and Sherry-roast Jerusalem Artichokes, Chestnuts and Mushrooms, proving that impressive meals are achievable in every home - no matter how limited your time, resources or energy.

Diana Henry is one of the UK's best-loved food writers and her star continues to rise in the US. She has a weekly column in the Sunday Telegraph and also writes for BBC Good Food, House & Garden and Waitrose Weekend, as well as being a regular broadcaster on BBC Radio 4.

Diana has won numerous awards for her journalism and books, including Cookery Journalist of the Year from the Guild of Food Writers (three times, most recently in 2015), Cookery Writer of the Year at the Fortnum & Mason Food and Drink Awards in 2013 and 2015 and Cookery Book of the Year for Simple at Fortnum & Mason Food and Drink Awards 2017. A Change of Appetite was voted Cookbook of the Year by the Guild of Food Writers in 2015 and A Bird in the Hand won a James Beard award in 2016. Diana has written ten other books including Crazy Water Pickled Lemons, A Bird in the Hand, Pure Simple Cooking, Salt Sugar Smoke, Roast Figs Sugar Snow, A Change of Appetite, Simple and How to Eat a Peach. Diana's books have sold over 700,000 copies worldwide.
Diana studied English Literature at the University of Oxford and journalism at City, University of London. She was a TV producer for the BBC for over ten years before starting to write. She lives in London with her children.

'Everything Diana Henry cooks I want to eat'
—Yotam Ottolenghi

"Henry's books will inspire you, even on a Wednesday night"—Eater

"For bung-it-in-the-oven cooks everywhere, this is a must-have book: Diana Henry has a genius for flavour."—Nigella Lawson

"Henry's roasting tin dinners are sumptuous things on which to drizzle
chutneys and relishes; meals you can close the oven door on before you
open a bottle of wine. They aim to be the intersection of casual and
elegant, that sweet spot where every home cook wants to live."—Marian Bull, Wall Street Journal Magazine

"One of our favorite cookbook authors."—Julia Moskin, The New York Times