The Art of Asking Your Boss for a Raise (Paperback) 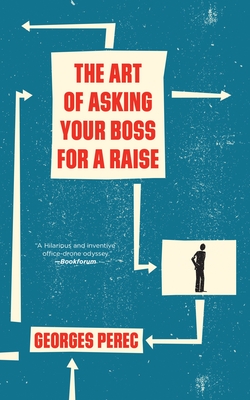 A long-suffering employee in a big corporation has summoned up the courage to ask for a raise. But as he runs through the looming encounter in his mind, his neuroses come to the surface: What is the best day to see the boss? What if he doesn’t offer you a seat when you go into his office?

The Art of Asking Your Boss for a Raise is a hilarious account of an employee losing his identity—and possibly his sanity—as he tries to put on the most acceptable face for the corporate world,with its rigid hierarchies and hostility to new ideas. If he follows a certain course of action, so this logic goes, he will succeed—but, in accepting these conditions, are his attempts to challenge his world of work doomed from the outset?

Neurotic and pessimistic, yet endearing, comic and never less than entertaining, Perec’s Woody Allen-esque underling presents an acute and penetrating vision of the world of office work, as pertinent today as it was when it was written in 1968.

Georges Perec (1936–82) won the Prix Renaudot in 1965 for his first novel Things: A Story of the Sixties, and went on to exercise his unrivalled mastery of language in almost every imaginable kind of writing, from the apparently trivial to the deeply personal. He composed acrostics, anagrams, autobiography, criticism, crosswords, descriptions of dreams, film scripts, heterograms, lipograms, memories, palindromes, plays, poetry, radio plays, recipes, riddles, stories short and long, travel notes, univocalics, and, of course, novels. Life A User’s Manual, which draws on many of Perec’s other works, appeared in 1978 after nine years in the making and was acclaimed a masterpiece to put beside Joyce’s Ulysses. It won the Prix Médicis and established Perec’s international reputation.

David Bellos is Professor of French and Comparative Literature and Director of the Program in Translation and Intercultural Communication at Princeton University. In 2005 Bellos was awarded the Man Booker International Translator’s Prize for his many translations of the novels of the distinguished Albanian writer Ismail Kadare. He is the author of several works on Balzac, the prize-winning biography Georges Perec: A Life in Words, and a biography of Romain Gary, published in 2010.

“We readers will have to deal with the fortunate burden of clearing shelf-space for another novel by Perec this spring, with the first English translation of The Art of Asking Your Boss for a Raise.”
—Most Anticipated Books of 2011, The Millions

“As a witty indictment of corporate culture and an artifact from one of the 20th century’s most bizarre literary movements, The Art of Asking Your Boss for a Raise—as with all the works of Georges Perec—is a puzzle too absurd not to explore ... [it] will interest any reader who has ever worked in a large bureaucracy and considered himself underpaid.”
—James K. McAuley, Harvard Crimson

“Perec’s novels are games, each different. They are played for real stakes and in some cases breathtakingly large ones. As games should be, and as literary games often are not, they are fun.”
—Los Angeles Times

“We defy you to walk by this book and not pick it up. Perfectly packaged and immediately intriguing!”
—A Largehearted WORD Book of the Week

“A brilliant ... conceptual, comedic novella from the writer who wrote the postmodern masterpiece Life: A User’s Manual.”
—City Arts

“An acute and penetrating vision of the world of office work.”
—Arthur

“Perec’s knack for absurdity and circumlocution ensures that each iteration is novel and urgent.”
—Full Stop

“[A] fun read for someone who enjoys computer programming and corporate irony, and would make a perfect gift for the office mate with a good sense of humor.”
—bestdamncreativewritingblog

“[A] terribly compelling work, one that does a great deal with very little. With his use of repetition, which also evokes a pre-set mechanism, Perec establishes a rhythm of sorts, while his subtle deviations from the pattern serve as moments of dark comedy.”
—Slant Magazine

“Certainly something different, and quite enjoyable.”
—Complete Review