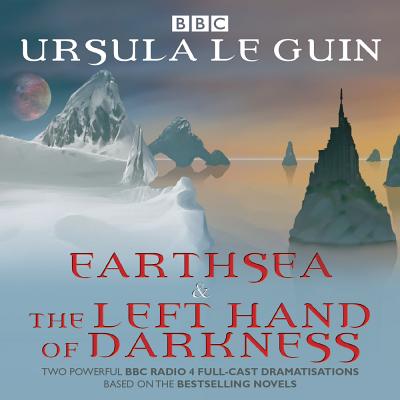 By Ursula le Guin, Full Cast (Read by), James McArdle (Read by), Toby Jones (Read by)
$37.95
Backordered. Place an order and we will let you know when to expect your book.

Earthsea is based on the first three books in the Earthsea Cycle. It tells the stories of Ged and Tenar, inhabitants of a vast archipelago where magic is part of life. Young wizard Ged releases a terrible shadow into the world; meanwhile, Tenar is taken from her home and family to become priestess and guardian of the Tombs of Atuan. The Left Hand of Darkness is set on Gethen, a world in the grip of an Ice Age whose people are both male and female, and neither. Genly Ai has been sent from Earth on the biggest mission of his life: to persuade the people of Gethen to join the Ekumen, a union of planets. But his task is fraught with danger. Unabridged. With a bonus interview Ursula le Guin interview disc.

Ursula Kroeber Le Guin was born in 1929 in Berkeley, and lives in Portland, Oregon. As of 2015, she has published twenty-one novels, eleven volumes of short stories, four collections of essays, twelve books for children, six volumes of poetry and four of translation, and has received many honors and awards including Hugo, Nebula, National Book Award, PEN-Malamud, and the National Book Foundation Medal. Her most recent publications are The Unreal and the Real: Selected Stories of Ursula K. Le Guin, 2012, and Steering the Craft: A 21st-Century Guide to Sailing the Sea of Story, 2015.

"This adaptation is a striking example of the power of audio to evoke images and emotion, and the whole team deserve credit for bring this classic of science fiction to a modern audience." —Tony Jones, Starburst Magazine