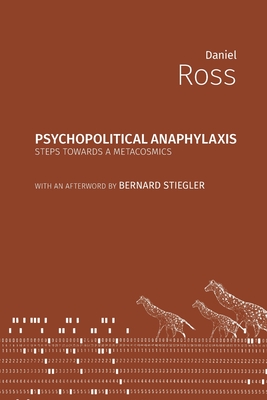 The great acceleration that has become known as the Anthropocene has brought with it destructive consequences that threaten to give rise to a dangerous and potentially explosive convergent reaching of limits, not just climatically or biospherically, but psychosocially. This convergence demands a new kind of thinking and a reconsideration of fundamental philosophical, political and economic theory in light especially of the age of computational capitalism, in order to prevent this convergence from becoming absolutely catastrophic. The French philosopher Bernard Stiegler argued that the basis for such a reconsideration must be, in a very general way, the thought of entropy.

Psychopolitical Anaphylaxis examines, draws on, and dialogues with Stiegler's work, and aims to take steps towards this new kind of thinking. Borrowing also from Georges Canguilhem and Peter Sloterdijk, among others, it argues for an immunological perspective that sees psychopolitical convulsions as a kind of anaphylactic shock that threatens to prove fatal. The paradox that ultimately must be confronted in the Anthropocene - conceived as an Entropocene - is the contradiction between the urgent need for a global emergency procedure and the equally necessary task of finding the time to carefully rethink our way beyond this anaphylaxis. In this book, Daniel Ross argues that the task of thinking today must be to inhabit this paradox and make it the basis of a new dynamic.