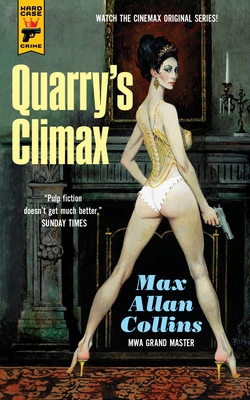 
There's Nothing More Dangerous Than a Loaded Magazine

Memphis, 1975. “Raunchy” doesn’t begin to describe Max Climer’s magazine, Climax, or his all-hours strip club, or his planned video empire. And evangelists, feminists, and local watchdog groups all want him out of business. But someone wants more than that, and has hired a killer to end Max’s career permanently. Only another hit man – the ruthless professional known as Quarry, star of the acclaimed series on Cinemax – can keep Climer from becoming a casualty in the Sexual Revolution.

Max Allan Collins is the author of Road to Perdition, the acclaimed graphic novel that inspired the movie, and of the multiple-award-winning Nathan Heller series of historical hardboiled mysteries. Max Allan Collins is one of most prolific and popular authors working in the field today. He was chosen as a 2017 Grand Master by the Mystery Writers of America.  He is also the literary executor of Mickey Spillane.

"Collins treats us to a wonderfully vivid look at the pornography industry in its heyday. From publishers to centerfolds to strippers to feminist protesters, he cuts through the stereotypes with quick bits of subtle characterization (but, please, don’t say you read a book with Climax in the title only for the characters)." - Booklist

I’ve written about the Quarry books several times… it remains my favorite Collins series. I think one of the reasons I enjoy these books so much is because it melds the headlong pulpy momentum of Mickey Spillane with the gleefully transgressive sensibility of seventies trash paperback series like The Executioner or The Liquidator. But, y’know, better...Collins can plot a mystery; everything develops naturally and the puzzle is always taxing without ever feeling contrived....I always enjoy seeing it done well and Collins does it better than most. I recommend all the Quarry books and you can read them in most any order, but I enjoyed this one more than any of them since The Wrong Quarry.   —AtomicJunkShop