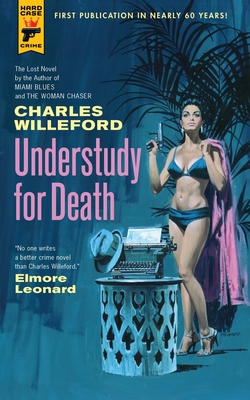 By Charles Willeford
$9.95
On Our Shelves Now

AN UNFORGIVABLE CRIME.
AN UNFORGETTABLE NOVEL.

Why would a happily married Florida housewife pick up her husband's .22 caliber Colt Woodsman semi-automatic pistol and use it to kill her two young children and herself? Cynical newspaper reporter Richard Hudson is assigned to find out - and the assignment will send him down a road of self-discovery in this incisive, no-holds-barred portrait of American marriage in the Mad Men era.

On the 30th anniversary of the death of the masterful novelist the Atlantic Monthly called the "father of Miami crime fiction," Hard Case Crime is proud to present Charles Willeford's legendary lost novel, unavailable since its original publication by a disreputable paperback house in 1961. One of Willeford's rarest titles (copies of the original edition sell for hundreds of dollars), Understudy for Death still has the power to disturb, half a century after its debut.

Charles Willeford was the acclaimed author of the Hoke Moseley detective novels that began with MIAMI BLUES, as well as numerous other classic crime novels such as COCKFIGHTER and THE WOMAN CHASER, both of which were (like MIAMI BLUES) turned into movies. A fighter in WWII, he earned the Silver Star, Bronze Star and Purple Heart for his service. He worked as a boxer, actor and horse trainer before his success as an author.

"This is darker than noir" - Seattle Book Review