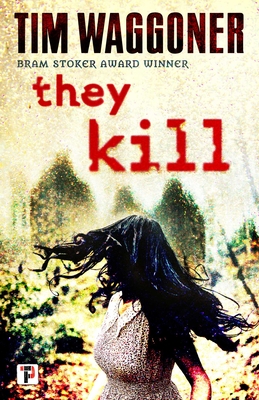 "They Kill plunges readers deep into the heart of pulse pounding supernatural horror with a story that could only come from the mind of Tim Waggoner." -- This is Horror What are you willing to do, what are you willing to become, to save someone you love? Sierra Sowell's dead brother Jeffrey is resurrected by a mysterious man known only as Corliss. Corliss also transforms four people in Sierra's life into inhuman monsters determined to kill her. Sierra and Jeffrey's boyfriend Marc work to discover the reason for her brother's return to life while struggling to survive attacks by this monstrous quartet. Corliss gives Sierra a chance to make Jeffrey's resurrection permanent - if she makes a dreadful bargain. Can she do what it will take to save her brother, no matter how much blood is shed along the way? FLAME TREE PRESS is the new fiction imprint of Flame Tree Publishing. Launched in 2018 the list brings together brilliant new authors and the more established; the award winners, and exciting, original voices.

Tim Waggoner's first novel came out in 2001, and since then he's published over fifty novels and seven collections of short stories. He writes original dark fantasy and horror, as well as media tie-ins. He's written tie-in fiction based on Supernatural, Grimm, The X-Files, Alien, Doctor Who, A Nightmare on Elm Street, and Transformers, among others, and he's written novelizations for films such as Halloween Kills, Resident Evil: The Final Chapter and Kingsman: The Golden Circle and. His articles on writing have appeared in Writer's Digest, The Writer, The Writer's Chronicle. He's the author of the acclaimed horror-writing guide Writing in the Dark, which won the Bram Stoker Award in 2021. He won another Bram Stoker Award in 2021 in the category of short nonfiction for his article "Speaking of Horror," and in 2017 he received the Bram Stoker Award in Long Fiction for his novella The Winter Box. In addition, he's been a multiple finalist for the Shirley Jackson Award and the Scribe Award, and a one-time finalist for the Splatterpunk Award. His fiction has received numerous Honorable Mentions in volumes of Best Horror of the Year, and he's had several stories selected for inclusion in volumes of Year's Best Hardcore Horror. His work has been translated into Russian, Portuguese, Japanese, Spanish, French, Italian, German, Hungarian, and Turkish. In addition to writing, he's also a full-time tenured professor who teaches creative writing and composition at Sinclair College in Dayton, Ohio.