200,000 Snakes: On the Hunt in Manitoba: Or, How I Found a New Beginning at the Bottom of a Giant Pit of Snakes (Paperback) 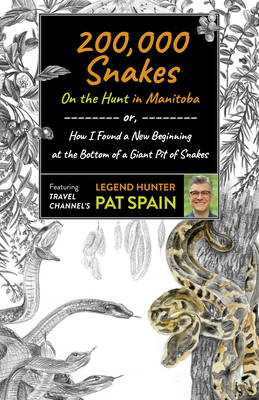 Pat Spain was living the life he had always dreamed of. He had just finished filming his first National Geographic TV series Beast Hunter, put in an offer on his first house with his girlfriend, was in the best physical shape he'd ever been in, had paid off the massive debt he'd incurred filming a web-based wildlife series and was getting to hang out with his TV and punk-rock idols like Harry Marshall, Henry Rollins and Brady Barr when he started getting stomach pains. A diagnosis of stage-3 colon cancer brought Pat's world crashing down around him in an instant. He went from planning a press tour and an appearance on The Tonight Show to learning how to change an ostomy bag, re-learning how to walk, and finding out if he liked pot brownies. On the Hunt in Manitoba is the darkly comedic story of how Pat became a wildlife TV host, lost his dream job, almost lost his life and came back from the depths the only way he knew how - covered in 200,000 snakes.