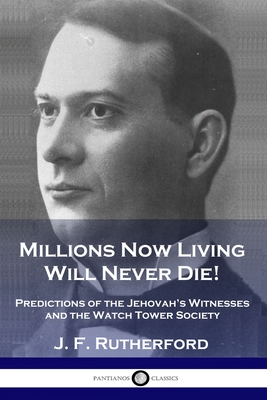 J.F. Rutherford was a leading Jehovah's Witness; from 1918 to 1920, he stated that the world had ended, and predicted that in 1925 a great resurrection would ensue.

Beginning as a shorter pamphlet, Rutherford's predictive work gradually grew into this full-length version of Millions Now Living Will Never Die The stark nature of Rutherford's foretellings about the near-future attracted attention, as did his use of Bible scriptures in support of claims; such as the idea that ancient prophets such as Abraham, Isaac and Jacob would return to life in 1925 since the world had already ended. Between 1918 and 1925 notions that the world would become a paradise, that Christendom would end, and that the dead would resurrect on earth were taught and promoted by Jehovah's Witnesses.

In the modern day, this book is commonly cited by detractors of the Watch Tower Society as an example of false doctrine and false prophecy. The fact that none of the much-publicized predictions happened in 1925 resulted in ridicule at the time. However, J. F. Rutherford maintained his position as leader, continued to publish religious books, and remained at the head of the Jehovah's Witnesses until his death in 1942.