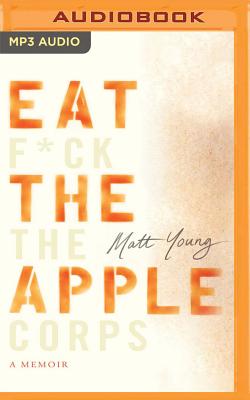 “To take the memories of a combat veteran and transform them into something funny, tender, and even whimsical at times is a delicate dance. Matt Young's Eat the Apple does this in frank flashes, exposing the senseless acts of cruelty inherent in military training and its psychological effects on soldiers. His unrelenting refusal to be pitied and the humor in his self-awareness are what make this memoir especially readable. Although you'll cringe with him during vulnerable and humiliating moments, his ownership of these experiences translates into a sort of wisdom you can take away, making Eat the Apple both a playful and cautionary war tale.”
— Aubrey Winkler, Powell's Books, Inc, Portland, OR

“Eat the Apple is a remarkably candid, inventive, and funny memoir about the devastating consequences of war for soldiers both abroad and at home. At a time when soldiers are too often seen monolithically in our culture as ‘The Troops,’ Matt Young’s stand-up comedy riffs and diarist confessions have a necessary humanizing and personalizing effect.”
— Matt Stowe, Greenlight Bookstore (Fort Greene), Brooklyn, NY

A gut-wrenching, beautiful memoir which explores toxic masculinity and the devastating consequences of war on one impressionable young soldier

Matt Young joined the Marine Corps aged 18, after a drunken night that culminated in him crashing his car into a fire hydrant. The teenage wasteland he fled followed him to the training bases of California. Young survived training and then three deployments to Iraq as an infantryman.

Eat the Apple is the searing and honest response to those years. Visceral, ironic, self-lacerating and ultimately redemptive, Young's story drops us unarmed into Marine Corps culture and lays bare the vulnerability of those on the front lines and the true, if often misguided, motivations that drove a young man to a life at war.

Tender and brilliantly written, Eat the Apple is a powerful coming-of-age story that explores toxic masculinity and maps the insane geography of our times.