On The Line (Hardcover) 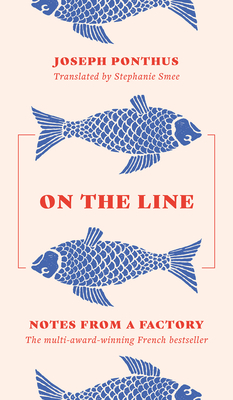 Unable to find work in his field, Joseph Ponthus enlists with a temp agency and starts to pick up casual shifts in the fish processing plants and abattoirs of Brittany. Day after day he records with infinite precision the nature of work on the production line: the noise, the weariness, the dreams stolen by the repetitive nature of exhausting rituals and physical suffering. But he finds solace in a life previously lived.

Shelling prawns, he dreams of Alexandre Dumas. Pushing cattle carcasses, he recalls Apollinaire. And, in the grace of the blank spaces created by his insistent return to a new line of text – mirroring his continued return to the production line – we discover the woman he loves, the happiness of a Sunday, Pok Pok the dog, the smell of the sea.

In this celebrated French bestseller, translated by Stephanie Smee, Ponthus captures the mundane, the beautiful and the strange, writing with an elegance and humour that sit in poignant contrast with the blood and sweat of the factory floor.

Joseph Ponthus (1978-2021) worked for over ten years as a social worker and special needs teacher in the suburbs of Paris. He was co-author of Nous... La Cité (The Suburbs Are Ours) and his masterpiece À la Ligne (On the Line) was published in France in 2019 to great acclaim. It won several literary prizes, including the Grand Prix RTL/Lire and the Prix Régine Deforges, and became a major bestseller.