On The Line: Notes from a Factory (Paperback) 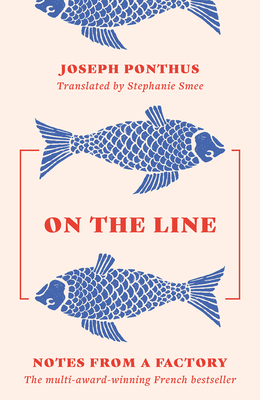 A celebrated French bestseller, this novel in verse that captures the mundane and the beautiful, the blood and sweat, of working on the factory floor in the processing plants and abattoirs of Brittany.

Unable to find work in his field, Joseph Ponthus enlists with a temp agency and starts to pick up casual shifts in the fish processing plants and abattoirs of Brittany. Day after day he records with infinite precision the nature of work on the production line: the noise, the weariness, the dreams stolen by the repetitive nature of exhausting rituals and physical suffering. But he finds solace in a life previously lived.

Shelling prawns, he dreams of Alexandre Dumas. Pushing cattle carcasses, he recalls Apollinaire. And, in the grace of the blank spaces created by his insistent return to a new line of text – mirroring his continued return to the production line – we discover the woman he loves, the happiness of a Sunday, Pok Pok the dog, the smell of the sea.

In this celebrated French bestseller, translated by Stephanie Smee, Ponthus captures the mundane, the beautiful and the strange, writing with an elegance and humor that sit in poignant contrast with the blood and sweat of the factory floor. On the Line is a poet's ode to manual labor, and to the human spirit that makes it bearable.

After studying literature and social work, Joseph Ponthus worked for over ten years as a social worker and special needs teacher in the suburbs of Paris. In 2012 he co-authored Nous... La Cite (The Suburbs are Ours). His most recent work is A la Ligne(On the Line). He lives and works in Brittany, France.

Stephanie Smee left a career in law to work as a literary translator. Recent translations include Hannelore Cayre’s The Inheritors and The Godmother (winner of the CWA Crime Fiction in Translation Dagger award), and Françoise Frenkel’s rediscovered World War II memoir, No Place to Lay One’s Head, which was awarded the JQ–Wingate Prize.

'Poetic and political, lyrical and realistic, Joseph Ponthus' spirited elegy is at once surprising, captivating and affecting' Télérama

'A work that is powerful, clever, benevolent, optimistic even. Essential reading' Causette

‘The magnificence of this novel derives in part from the marriage of form and content, with the verse line evoking a literal manifestation of this experience. On the Line is marked by a heady admixture of brutality and tenderness, elevated throughout by Ponthus’s philosophical hunger and gratitude for common life.’ —Stephanie Bishop, The Monthly