The Moon, Lamentations, Pancakes and Much More: Research on Subjects of Jewish Law (Paperback) 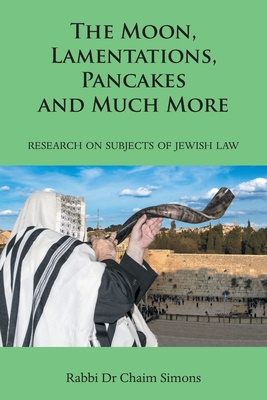 A boy in America spent nearly a year learning his Barmitzvah Parashah (Torah reading) and then came to Israel for the Shabbat of his Barmitzvah. However, to his shock he learned that that the Parashah that he had so studiously learned over the course of a year had been read on the previous Shabbat What happened? There are indeed a few occasions in some years when the Parashah read in Israel is not the same as that read in the Diaspora. One of the many papers in this book discusses this question. The following apparent anomalous questions are also discussed.

The Shulchan Aruch (Code of Jewish Law) gives a long list of days on which one (theoretically) fasts during the Jewish Year. For each of these days, a reason is given. However, in one case, the ninth day of the month of Tevet, the Shulchan Aruch declines to give a reason. Why and what is the reason for the secrecy?

In the not-too-distant past there was the triennial cycle in Israel for reading the entire Torah. When this changed to the annual cycle as was the customary in the Diaspora, this caused a problem as to what to read from the Torah on Simchat Torah in Israel. What was the reason for this, and how was it solved?

May one (although it is not recommended ) use black shoe polish to blacken the straps of a pair of Tefillin?

An additional chapter suddenly appeared at the end of Megillat Ta'anit. How did this occur?

Everyone knows that the Shofar is blown on Rosh Hashanah (the Jewish New Year). Why then do people living near a Synagogue hear the shofar being blown early every morning during the entire month preceding Rosh Hashanah?

After the Synagogue service at the termination of the Sabbath, all the congregants went outside the Synagogue, and started to look for the moon. What was special about the moon?

Everyone knows that one reads Megillat (Scroll) Esther on Purim. However, there are also four other megillot read during the course of the year. One of them, namely Eichah (Lamentations), is read with everyone sitting on the floor. Why on the floor, and what is the occasion?

The Festival of Chanukah is known as the Feast of Lights since one lights an increasing number of candles each night. But why is it customary to eat latkes (pancakes) on Chanukah?

The Festival of Purim is not observed on the same date throughout the world. In addition, there are cities where Purim is celebrated for two days. Why this anomaly and does it apply to all the mitzvot (observances) of Purim?

Is it correct for an orphan to advance the age for his Barmitzvah from 13 to 12?

Rain is essential almost everywhere in the world, but it must be in the correct season of the year. Why then do Jews living in the southern hemisphere pray for rain during their summer and not during their winter?

Why does a prayer for the Creator of the moon depend on the time of the average new moon rather than on the actual time of the astronomical new moon?

Why was the pilgrimage which originally took place in Meron, in the north of Israel, on Pesach Sheni (the minor Passover) moved over to Tiberias?

The Talmud refers to a boy born with two heads and the observance of various commandments in connection with him. Why has such a situation become more relevant in our generation?