The Night Parade of 100 Demons: A Legend of the Five Rings Novel (Paperback) 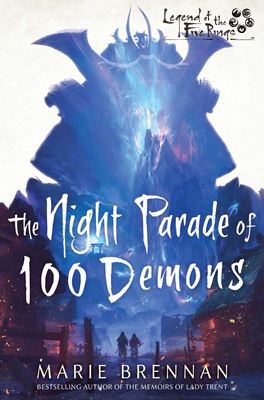 A thrilling epic fantasy adventure in the astonishing realm of Legend of the Five Rings, as two rival clans join forces to investigate a lethal supernatural mystery

Chaos has broken out in the isolated Dragon Clan settlement of Seibo Mura. During the full moon, horrifying creatures rampage through the village, unleashing havoc and death. When the Dragon samurai Agasha no Isao Ryotora is sent to investigate, he faces even greater danger than expected. To save the village, he must confront his buried past – not to mention an unexpected Phoenix Clan visitor, Asako Sekken, who has his own secrets to hide. The quest to save Sebo Mura will take the two samurai into the depths of forgotten history and the shifting terrain of the Spirit Realms… and bring them face to face with an ancient, terrifying evil.

MARIE BRENNAN is a former anthropologist and folklorist who shamelessly pillages her academic fields for material. She recently misapplied her professors’ hard work to Turning Darkness Into Light, a sequel to the Hugo Award-nominated series The Memoirs of Lady Trent. As half of M A Carrick, she is also the author of The Mask of Mirrors, first in the Rook and Rose trilogy

"Brennan imbues both of her very different samurai with very different but excellent characters, and the setting with just the right amount of intrigue to keep the readers' attention... It's all really well done and made me smile at the very end – a lot of fun and highly enjoyable."
— Garik16’s SFF Reviews, on The Night Parade of 100 Demons

"An entertaining and impactful read, that went far beyond its supernatural elements to create a very human, emotional story."
— Beneath a Thousand Skies, on The Night Parade of 100 Demons

"The fascinating and rather beautiful way that Marie has presented the culture and world of Rokugan drew me in and kept me turning the page."
— Big Geordie Geek, on The Night Parade of 100 Demons