The Apocalypse and the End of History: Modern Jihad and the Crisis of Liberalism (Hardcover) 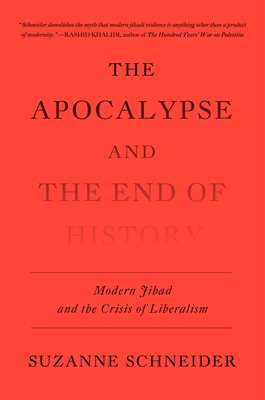 In this authoritative, accessible study, historian Suzanne Schneider examines the politics and ideology of the Islamic State (better known as ISIS). Schneider argues that today’s jihad is not the residue from a less enlightened time, nor does it have much in common with its classical or medieval form, but it does bear a striking resemblance to the reactionary political formations and acts of spectacular violence that are upending life in Western democracies. From authoritarian populism to mass shootings, xenophobic nationalism, and the allure of conspiratorial thinking, Schneider argues that modern jihad is not the antithesis to western neoliberalism, but rather a dark reflection of its inner logic.


Written with the sensibility of a political theorist and based on extensive research into a wide range of sources, from Islamic jurisprudence to popular recruitment videos, contemporary apocalyptic literature and the Islamic State's Arabic-language publications, the book explores modern jihad as an image of a potential dark future already heralded by neoliberal modes of life. Surveying ideas of the state, violence, identity, and political community, Schneider argues that modern jihad and neoliberalism are two versions of a politics of failure: the inability to imagine a better life here on earth.

Suzanne Schneider is Deputy Director and Core Faculty at the Brooklyn Institute for Social Research, specializing in political theory and history of the modern Middle East. She is the author of Mandatory Separation: Religion, Education, and Mass Politics in Palestine, and her writing has appeared in Mother Jones, n+1, The Washington Post, and Foreign Policy, among other outlets.

“Schneider demolishes the myth that modern jihadi violence is anything other than a product of modernity.”
—Rashid Khalidi

“By attributing Islamic militancy neither to immediately political nor distantly theological causes, Suzanne Schneider’s wonderfully lucid and convincing argument allows us to see it in anew as something both familiar and frightening in its ubiquity. The links she draws between the violent, apocalyptic, and nihilistic character of ISIS and the colonial origins of neoliberal practices make for a wholly original approach to the subject.”
—Faisal Devji, author of Muslim Zion

“In her revelatory new book, Suzanne Schneider dismantles all-too-common invocations of ‘jihad’ as a timeless, essentialized force that defines a monolithic and static version of Islam. Instead, she situates the concept firmly within the context of contemporary geopolitical, economic, and ideological trends. Deftly juxtaposing classical Islamic jurisprudence alongside social media propaganda videos, the polemics of Western politicians alongside the narratives of individual jihadis, the PowerPoint presentations of private military corporations alongside glossy org charts produced by extremist groups, and more, Schneider brilliantly challenges prevailing assumptions about sovereignty, the nation state, the monopoly on violence, and more. Through her erudite analysis, entities like ISIS emerge not as atavistic reincarnations of medieval brutality, but rather as responses to political and economic conditions that implicate and even darkly mirror developments in the imperial core. The result is both a clarifying vision of our contemporary moment and a generative stock of provocative insights into possible futures for the Middle East, the nations that define themselves as making up ‘the West,’ and the broader, interconnected world that contains and belies easy distinctions between the two.”
—Patrick Blanchfield, author of Gunpower: The Structure of American Violence

“[Schneider’s] discussion of the ‘jihadists,’ their motivations and rationales most certainly need to be heard by those who would send their military to foreign lands.”
—Ron Jacobs, CounterPunch