Improvisations of Empire: Thomas Pringle in Scotland, the Cape Colony and London, 1789-1834 (Paperback) 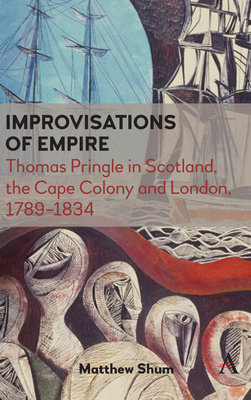 'Improvisations of Empire' offers the first extended critical, biographical and historiographical account of the work of Thomas Pringle, a poet and writer who occupies a central place in the cultural imaginary of English-speaking, white South Africans. However, there has been, to date, no single study which attempts to encompass all the aspects of Pringle's life and work, and, particularly, to examine his poetry in the 'thick' context of its different national locations and his importance as a transnational and not merely a local or colonial writer.

Using the methods of close reading, and combining these with an examination of the historical record (much of it archival material unknown to, or ignored by, previous scholarship), 'Improvisations of Empire' seeks to understand Pringle's writing, particularly the poetry, within the layered histories of his Scottish Enlightenment background and his early literary exposure to both Scottish and English Romanticisms. It then traces how these formative influences are refracted, and fractured, by his colonial experiences in the Cape Colony, before undergoing yet another modification during his period of residence in London (1826-1834). It was during this final stage of Pringle's career that most of his writing was published for the first time, and very little critical attention has been paid either to the retrospective character of these writings, or to how they are inflected by Pringle's metropolitan status as a prominent abolitionist, secretary of the Anti-Slavery Society, an increasingly fervid evangelical and a prominent editorial figure in the world of the literary annuals so popular at the time. Matthew Shum additionally argues that, quite apart from his crucial importance to South African literature, Pringle can also be understood as a figure working at a revealing tangent to metropolitan paradigms. The study explores Pringle's 'improvisations' of his imperial identity in various locations and suggests that his writing offers a limit case for mainstream literary paradigms as they press up against unfamiliar and often disturbing colonial conditions.