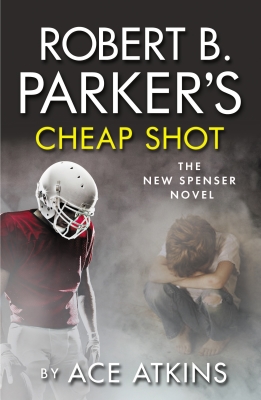 By Ace Atkins
$14.75
Backordered. Place an order and we will let you know when to expect your book.

"True to his practice of exceeding his own standards with each new novel, Atkins gives Robert B. Parker's long-running series one of its best installments to date" (Bookreporter.com) with the Spencer novel, Cheap Shot... Kinjo Heywood is one of the New England Patriots' marquee players--a hard-nosed linebacker who's earned his standing as one of the toughest guys in the league. He may be worth millions but his connection to a nightclub shooting two years before is still putting a dangerous spin on his life, and his career. When Heywood's nine-year-old son, Akira, is kidnapped, and a winding trail through Boston's underworld begins, Spenser puts together his own all-star team of toughs. It will take both Hawk and Spenser's protege, Zebulon Sixkill, to watch Spenser's back. Because Heywood's next unpredictable move puts everyone in jeopardy as the clock winds down on Akira's future.

Robert B. Parker was the New York Times bestselling author of seventy books, including the legendary Spenser detective series, the novels featuring Chief Jesse Stone, and the acclaimed Virgil Cole / Everett Hitch westerns, as well as the Sunny Randall novels. Winner of the Mystery Writers of America Grand Master Award and long considered the undisputed dean of American crime fiction, he died in January 2010. Ace Atkins is the Edgar-nominated author of fifteen books, including the forthcoming Quinn Colson novel The Forsaken. Selected by the Robert B. Parker estate to continue the Spenser novels, he has also written Robert B. Parker's Wonderland and Robert B. Parker's Lullaby, both of which were New York Times bestsellers. He lives in Oxford, Mississippi.