Birds of the Sherborne Missal (Paperback) 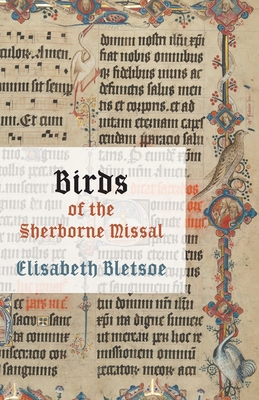 A missal contains the text and often the music to conduct the Christian Mass throughout the year and the one at Sherborne was created c. 1400 for the monks of the Benedictine Abbey there. It is unique for its remarkable marginal series of naturalistic birds, most of which are native to the area and often given their dialect names. These are mainly to be found in the central pages, appropriately where there is also inscribed musical notation. The missal's lavish scale and decoration served to emphasise the town's spiritual pre-eminence in Wessex.

In this poem-cycle, each bird was observed in its native habitat within the boundaries of the Sherborne diocese and then linked back to the missal by means of religious iconography, imagery relating to books, pigments or methods of illumination as well as bird mythology, the latter often subverting the original Christian intention. The Japanese haibun was loosely employed as its form is well suited to nature-notes and the similar sized blocks of text were visually pleasing, echoing the blocks of heavy Gothic script. The accompanying haiku allowed for a brief word-sketch of the bird or its surroundings, which literally illuminated the whole.

Rightly admired for her ingenious lexical device, she is skilled at blending dialectical vernacular with specialised terminologies from the natural sciences, historiography, folklore and taxonomy...her synthesis of heterogeneous glossaries lends a deeply nuanced interplay between laminate aesthetics in the bricolage, unlocking a range of associated impressions at the foundation of these resonant meditations. (Chris Cornwell, The Lonely Crowd, 2017)

The sheer pleasure in reading her work comes from its mix of registers, its variety of diction and the exceptional way in which she fuses experience with learning and makes it all appear so easy and as natural as breathing. Her work is rich and highly-textured and, although complex, never obscure or unrewarding. (Steve Spence, Stride, 2010)