Eager for Glory: The Untold Story of Drusus the Elder, Conqueror of Germania (Hardcover) 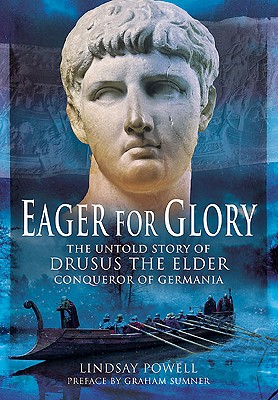 By Lindsay Powell
Unavailable. Orders will be auto-cancelled.

Drusus the Elder was regarded by the Romans as the first conqueror of Germania (The Netherlands and Germany) and a hero in the mold of Alexander the Great. Yet there has never been a full volume dedicated to his remarkable story, achievements and legacy. EAGER FOR GLORY brings this heroic figure back to life for a modern audience. Drusus was a stepson of Augustus, through his marriage to Livia. As a military commander he led daring campaigns by sea and land that pushed the northern frontiers of Rome's empire to the Elbe River. He oversaw one of the largest developments of military infrastructure of the age. He married Marc Antony's daughter, Antonia, and fathered Germanicus, Rome's most popular general, and the future emperor Claudius. He was grandfather of Caligula. He died when he was only 29 and was revered in death. Drawing on ancient texts, evidence from inscriptions and coins, the latest findings in archaeology, as well as astronomy and medical science, Lindsay Powell has produced a long overdue and definitive account of this great Roman. This ground-breaking book will appeal to all interested in ancient world history, biography, military history and adventure stories, and will be of particular interest to those studying classics in academia, Roman period re-enactment and numismatics.