Kapp to Cape: Never Look Back: Race to the End of the Earth (Paperback) 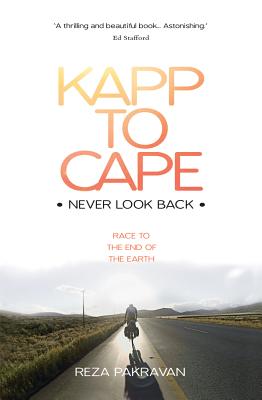 By Reza Pakravan
Unavailable. Orders will be auto-cancelled.

Deciding to break away from his comfortable lifestyle in London, Reza and his friend Steven set off from the most northerly point on mainland Europe to cycle the 11,000 miles to the other end of the planet, completely unsupported. Their expedition becomes a race against the clock, as they attempt to complete the trip in a world record of just 100 days. Battling punishing terrain and primitive roads, debilitating climates, malaria, food poisoning, and heat stroke, their thrilling journey brings them face to face with some of the world’s most stunning, memorable, and volatile regions. This is the intensely personal story of one man’s mission to create a more purposeful life, and the epic journey he took to get there.

Reza Pakravan holds the Guinness World Record for crossing the Sahara desert by bicycle. He has also cycled the Annapurna Circuit, the length of the planet from Norway to South Africa, and through the Amazon rainforest along the Trans-Amazonian Highway. In 2012, he was listed among the world’s 20 most seasoned travelers by Men’s Fitness.

“Pakravan’s inspiring, often riveting account of his adventure showcases his remarkable optimism and benefits from a pleasing balance of humor and introspection.” —Booklist