The Mouthmark Book of Poetry (Paperback) 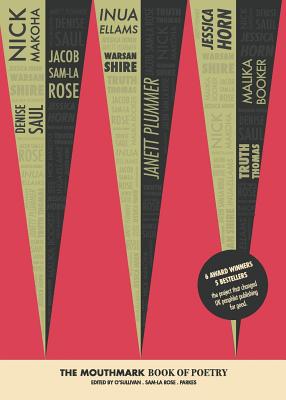 'The mouthmark Book of Poetry' is an anthology of the individual-author titles published under the mouthmark poetry pamphlet series, comprising the work of Nick Makoha, Inua Ellams, Jacob Sam-La Rose, Jessica Horn, Truth Thomas, Denise Saul, Malika Booker, Janett Plummer and Warsan Shire. The series was conceived by flipped eye publishing's senior editor, Nii Ayikwei Parkes, as a means to get poets from non-mainstream backgrounds - including performance - into print. It was revolutionary for two reasons; first, it was a pamphlet series developed with a specific aim (later, tall-lighthouse would launch its pilot series, and, much later, Faber would launch its New Poets Initiative); second, it was a finite series - to end after ten pamphlets. After some success with the first two pamphlets in the series, Nick Makoha's 'The Lost Collection of an Invisible Man' (2005) and Inua Ellams' '13 Fairy Negro Tales' (2005), the Arts Council of England provided funding for the next four. It took six years for the series to be completed, but its impact far exceeded expectations. Authors such as Inua Ellams, Jacob Sam-La Rose (later editor of the last pamphlet in the series), Malika Booker, Nick Makoha and Warsan Shire, have risen to international prominence; three of the pamphlets were cited by the Poetry Book Society pamphlet selectors for their quality; two of the poets feature in the new Penguin Modern Poets series; and Truth Thomas's from his pamphlet 'Party of Black' (2006) was chosen for Nikki Giovanni's 'The 100 Best African American Poems' (Sourcebooks, 2010). Crucially, the series has retailed admirably as well, with over 50,000 copies sold at events - and through conventional retail channels. Initially released exactly four years ago as a hardback that retained hallmarks of the iconic mouthmark series, such as the distinctive brown paper-look cover with bold black designs, this low-priced paperback edition seeks to introduce more readers to the work of the nine brilliant poets published under the series.