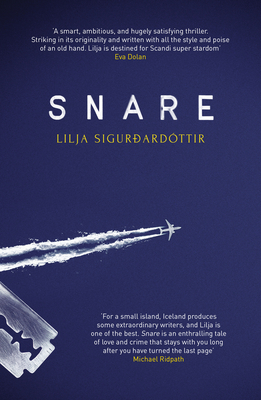 By Lilja Sigurdardóttir
$14.95
Backordered. Place an order and we will let you know when to expect your book.

First in the Reykjavik Noir Trilogy

After a messy divorce, attractive young mother Sonia is struggling to provide for herself and keep custody of her son. With her back to the wall, she resorts to smuggling cocaine into Iceland, and finds herself caught up in a ruthless criminal world. As she desperately looks for a way out of trouble, she must pit her wits against her nemesis, Bragi, a customs officer, whose years of experience frustrate her new and evermore daring strategies. Things become even more complicated when Sonia embarks on a relationship with a woman, Agla. Once a high-level bank executive, Agla is currently being prosecuted in the aftermath of the Icelandic financial crash.
Set in a Reykjavík still covered in the dust of the Eyjafjallajökull volcanic eruption, and with a dark, fast-paced and chilling plot and intriguing characters, Snare is an outstandingly original and sexy Nordic crime thriller, from one of the most exciting new names in crime fiction.

'This first novel of a planned trilogy is stylish, taut and compelling and a film adaptation is in the pipeline. With characters you can’t help sympathising with against your better judgement, Sigurdardottir takes the reader on a breathtaking ride’ Daily Express

‘Snare will ensnare you’ Marie Claire

‘A smart, ambitious, and hugely satisfying thriller. Striking in its originality and written with all the style and poise of an old hand. Lilja is destined for Scandi super stardom’ Eva Dolan

‘For a small island, Iceland produces some extraordinary writers, and Lilja is one of the best. Snare is an enthralling tale of love and crime that stays with you long after you have turned the last page’ Michael Ridpath

‘Crisp, assured and nail-bitingly tense, Snare is an exceptional read, cementing Lilja’s place as one of Iceland’s most outstanding crime writers’ Yrsa Sigurdardottir

‘Clear your diary. As soon as you begin reading Snare, you won’t be able to stop until the final page’ Michael Wood

‘Snare is a great read and the finale is both shocking and unexpected … a Wizard-of-Oz ending, without the laughs. Terrific and original stuff' Max Easterman, European Literature Network

Icelandic crime-writer Lilja Sigurdardóttir was born in the town of Akranes in 1972 and raised in Mexico, Sweden, Spain and Iceland. An award-winning playwright, Lilja has written four crime novels, with Snare, the first in the Reykjavik Noir series, hitting bestseller lists worldwide. Trap was published in 2018, and a Book of the Year in Guardian. The film rights for the series have been bought by Palomar Pictures in California. Lilja lives in Reykjavík with her partner.

“Thriller of the year.” —New York Journal of Books

“With its clever plot and brisk, tight pace, this hard-to-put-down Nordic thriller will be a treat for crime fiction fans.” —Library Journal Online