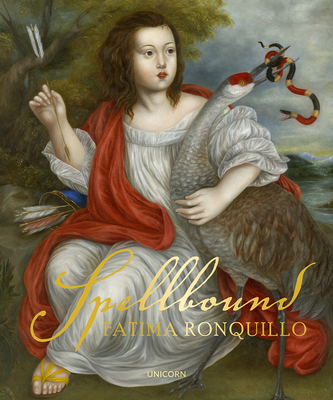 By Fatima Ronquillo
$35.00
On Our Shelves Now

Spellbound is the first book-length retrospective of Fatima Ronquillo, a self-taught painter who was born in the Philippines, came of age in San Antonio, and resides in Santa Fe. The Spanish and American colonial histories of these three places—and the uneasy blend of cultures that resulted there—is a subtle presence in Ronquillo’s work, where Old World techniques rub elbows with tropes drawn from Latin American magical realism. The world of Spellbound is one that marries traditional portraiture with a subversive sense of drama and playfulness. Ronquillo’s stately subjects gaze out with a regal or military bearing while angels and animals flit mischievously around the margins. Dogs wear their master’s tearful eyeballs as collar jewelry, cherubic boys clutch writhing snakes in their fists, and nuns adorn their habits with ungainly floral towers and spritely jungle monkeys.

Spellbound contains more than one hundred eighty color images of Ronquillo’s lush and deadpan oil paintings, the studies and sketches for several other works, and an introduction from noted arts writer John O’Hern.