Through My Heart (Hardcover) 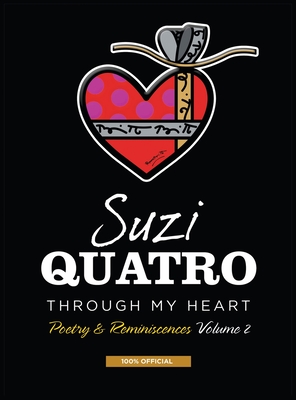 In this, the second volume of poetry and reminiscences, rock icon Suzi Quatro bares her soul through her poetry and adding many personal stories and images to make this book a very up close and personal look into her art and her life. Suzi Quatro is recognised as the first in a long line of female rock stars to be inspired by her. Here in her own words:

"A little story that seems appropriate to share with you along with the publication of my second offering of poems:

My documentary, SUZI Q, was released worldwide at the end of 2019, and was a big success. I insisted on it being the truth, the whole truth, and nothing but the truth so help me God And, even though I had scissors, because after all, it is my life, I stopped myself cutting out what I lovingly refer to as 'cringe' moments. And thank goodness, because they are the best bits in the film.

So, at the premier in London's Regents Theatre, I was booked to appear on stage and do a Q & A at the end of the film. Me being me, I really wanted to be inside and watch it on the big screen with the audience, so I snuck in once the lights went down and watched, of course spotted by a couple of of audience members who I immediately said SHHHH to.

I watched, feeling humbled, uncomfortable, honoured, every emotion you can think of.

But the biggest surprise was watching all the other famous rock n roll women musicians talk so glowingly about me.

All of them saying "if it wasn't for me, they would not have even considered picking up an instrument."

I found myself crying a river

Next day, I called my good friend Cherie Currie, and relayed this story to her.

Me: Cherie, I have just realised something

Me: by doing what I did, I gave women all over the world, permission to be different