The Decline of the West: Form and Actuality (Hardcover) 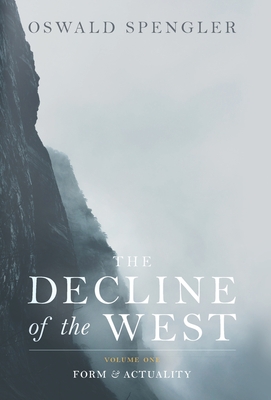 The first volume of Oswald Spengler's The Decline of the West is a classic milestone in the annals of historiography. However, it is not a history book in the traditional sense of recounting events in chronological order. Instead, it tries to explain the mechanisms that make different cultures tick. While classical culture had no concept of the past or future and was only fixated on the present, Western culture is focused on both the past as memory and the future as unconquered territory.

Like organisms that are born, mature and eventually die, cultures are the blossoming youth while civilizations usher in senility, decay and demise. When a culture becomes a civilization, decadence sets in and the ensuing downward spiral becomes a Faustian whirlwind of self-destruction. This is inevitable as we can see that each culture's evolution has its parallels in other periods of human history.

The endgame for the West has already begun. It is in terminal decline, desperately trying to revive the dead forms and buried traditions that animated its Promethean spirit in its youthful heyday of exuberance. But in old age, it all seems preposterous, and hence in vain as the West has become tired of itself and unable to innovate in either the arts or philosophy. The West is on its way to the grave and what will see the light next must necessarily be something completely new and not just a corpse reanimated.