The Decline of the West: Perspectives of World-History (Paperback) 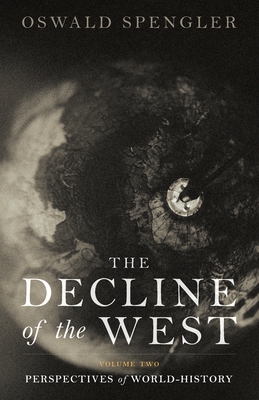 In the second and more controversial, albeit optimistic, volume of The Decline of the West, Oswald Spengler deals with the world historical perspectives of his comparative cultural morphology. The periodical calm surrounding the constant and eternally recurring movements, described in the first volume, is over. Spengler develops his theory of "Caesarism" - a tendency towards dictatorship peculiar to mass democracy.

According to Spengler, today we live in the decadent stage of civilization. Previously, the people of culture used money for buying and selling while their main thoughts and occupations lay elsewhere. The people of civilization, however, exclusively think in terms of money and nothing else. That is why our period is also marked by rapacious oligarchs, cunning stock market manipulation, a flourishing art trade and boundless corruption. Only the return of the eternal values of blood and race, through the coming of the Caesars, can destroy the tyranny of the financial mind. Thus Caesarism will bring the victory of strength politics over capital, breaking the pecuniary power and promoting national welfare.

The scene is set for the final battle between the forces of plutocracy and chaos and the political will and order of the Caesars.