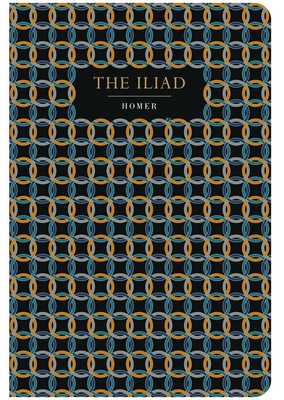 Chiltern Publishing creates the most beautiful editions of the World's finest literature. Your favorite classic titles in a way you have never seen them before; the tactile layers, fine details and beautiful colors of these remarkable covers make these titles feel extra special and will look striking on any shelf.

This edition of Homer's epic, Iliad, is from the Alexander Pope Translation, tells the story of the final year of the Trojan War. First written in the 8th century BC, after centuries of being passed on orally, the story follows the magnificent Greek warrior Achilles, as well as his rage and the destruction it causes.

When Agamemnon refuses to return Chryseis to her father, angering the gods. He is forced to release her, So he takes Briseis instead, angering Achilles and leading him to refuse to fight. Parallel to this, the story also follows the Trojan warrior Hector and his efforts to fight to protect his family and his people.

Homer's legendary account of this nine-year ordeal, is considered the greatest war story of all time and one of the most important works of Western literature.