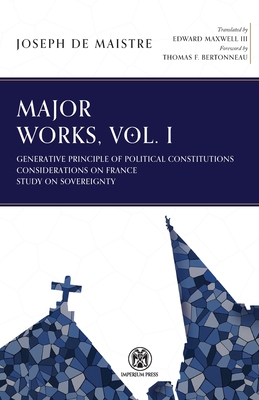 Joseph de Maistre is one of the greatest of all reactionary thinkers, and in this volume, three of his principal works are brought together unabridged.

A leading voice defending the traditional order of throne and altar, Maistre distinguished himself as a political commentator in Considerations on France, showing the French Revolution to have been a disaster by his panoramic view of history and stylistic genius. He distilled the themes of the Considerations in his Essay on the Generative Principle of Political Constitutions where he argued them in a more perennial sense, less tied to the particulars of 18th century France. Earlier in his life he compiled extensive commentary on Rousseau's thought which formed the Study on Sovereignty, a savage critique of the Genevan philosopher.

Ever the devout Catholic, Maistre argued uncompromisingly for traditionalism and against the Enlightenment, and though his treatment of bloodletting and expiation has been often remarked upon by his critics, too few have underlined the warmth, humour, and humanity the reader discovers in him. In his magisterial introduction to this volume, the late Thomas F. Bertonneau draws our attention both to Maistre's literary virtues and to his drawing and quartering of the Enlightenment's major mouthpieces.