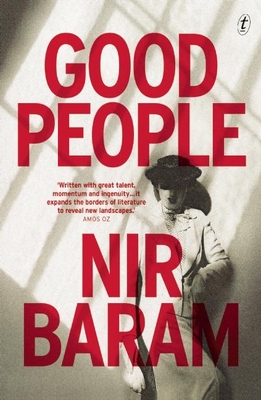 When you pick up a book called "Good People" and it's set during the lead-up to World War II, you know already that the characters at the center of the novel will not, in fact, be good people. Nir Baram has crafted an intense portrait of two amoral opportunists, one German and one Russian, recruited by their respective regimes, and sure that their actions are all perfectly justified. Sasha, a Russian wanna-be poet, finds her true calling in the NKVD, soliciting confessions from all her family and former friends, under the mistaken belief that she will regain custody of her twin younger brothers from the state. Thomas, a skilled businessman whose naked admiration for American-style capitalism puts him in hot water with Nazi true believers, shifts his work over to the German Foreign Office in Poland, where he uses his former company's market research into Polish identity to give German occupiers insight into how to control the Polish population.

' Baram] asks what kind of people would choose to serve...empires of falsehood with their eyes open and their minds sharp. Not monsters or even cynics, he answers in a pacey, plot-heavy novel of dramatic events and big ideas, but gifted storytellers fuelled by ordinary motives of love, loyalty or ambition.'--Economist

'One of the most intriguing writers in Israeli literature today.'--Haaretz

'Good People has been showered with praise for its elegance prose and scope... By putting the types of people who brought about the Second World War under a microscope, Baram creates an allegorical warning bell.'--The Culture Trip

'A richly textured panorama of German and Russian life...This ample novel lives most memorably through Baram's vignettes of people, dwellings, cities, landscapes and the like that seem to lie, at times, at the periphery of its central concerns.'--Sydney Morning Herald

'Precise and evocative, Good People is a riveting glimpse into a different place and a different time.'----Canberra Weekly
'The tale of ordinary, middle-class lives sucked into a moral maelstrom. It is compulsive and profoundly disturbing.'--Sunday Star Times

It's late 1938. Thomas Heiselberg has built a career in Berlin as a market researcher for an American advertising company.

In Leningrad, twenty-two-year-old Sasha Weissberg has grown up eavesdropping on the intellectual conversations in her parents' literary salon.

They each have grand plans for their lives. Neither of them thinks about politics too much, but after catastrophe strikes they will have no choice.

Thomas puts his research skills to work elaborating Nazi propaganda. Sasha persuades herself that working as a literary editor of confessions for Stalin's secret police is the only way to save her family.

When destiny brings them together, they will have to face the consequences of the decisions they have made.

Good People is a tour de force that has been showered with praise in many countries.

Nir Baram was born into a political family in Jerusalem in 1976. He has worked as a journalist and an editor, and as an advocate for equal rights for Palestinians. He began publishing fiction when he was twenty-two, and is the author of five novels in Hebrew. Several have been translated into more than ten languages and received critical acclaim around the world. In 2010 he received the Prime Minister's Award for Hebrew Literature.

Nir Baram was born in Jerusalem in 1976. He has worked as a journalist, editor, and as an advocate for equal rights for Palestinians. He's the author of five novels. Good People is the first to be translated into English. Baram received the 2010 Prime Minister's Award for Hebrew Literature. Jeffrey Green is a writer and translator living in Israel. He has a doctorate in Comparative Literature from Harvard, and has also published, among other things, a novel in Hebrew, a book of poetry and a book about translation.