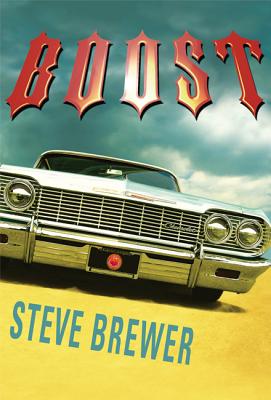 By Steve Brewer
$14.00
Backordered. Place an order and we will let you know when to expect your book.

Sam Hill steals cars. Not just any cars, but collectible cars, rare works of automotive artistry. Sam’s a specialist, and he’s made a good life for himself in Albuquerque, NM. Things change one night after he steals a primo 1965 Thunderbird from a lawyer’s house. In the trunk, Sam finds a corpse, a police informant with a bullet hole between his eyes. And he learns that cops are swarming the garage where he’d planned to deliver the T-Bird. Somebody set Sam up. Played a trick on him. And Sam, a prankster himself, can’t let it go. He must find whoever framed him, and get his revenge with an even bigger practical joke, one that soon has gangsters gunning for him and police on his tail. Using his own resourcefulness as well as the assistance of his two pals, apprentice thief Billy Suggs and an inscrutable giant named Way-Way Henderson, Sam learns who’s behind the body in the trunk—Phil Ortiz, a notorious drug dealer and car collector. Sam, it seems, boosted Ortiz’s favorite car—a green low-rider painted with the image of Our Lady of Guadalupe—and Ortiz is determined to get even. And to get that car back. But Sam has other ideas. Such as sticking Ortiz with the body of the dead informant. Such as framing the sweaty salvage man who sided with Ortiz. Such as stealing the drug dealer’s entire collection of valuable cars. The stakes get higher with each round of one-upsmanship. Finally, it’s clear that Ortiz won’t quit until he has the last laugh and Sam Hill’s dead. In Boost, Brewer stirs up his usual potent mixture of high crime and low comedy in a rollicking novel where car thieves are the good guys and the action never stops.