Path of Compassion: Stories from the Buddha's Life (Paperback) 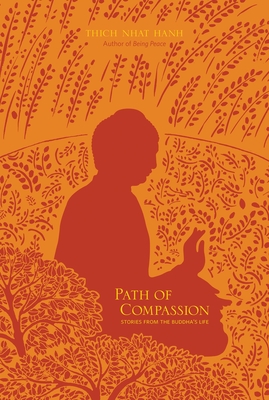 Path of Compassion is a collection of key stories from Thich Nhat Hanh’s classic Old Path White Clouds, a book celebrating its 20th publishing anniversary this year. It tells the fascinating life story of Prince Siddhartha, who left his family and renounced his carefully guarded life, and after many years of spiritual seeking became the Buddha, the Enlightened One. Far more than the description of an unusual life story, it serves as an enjoyable, compelling, and informative introduction to Buddhism by conveying its most important teachings in a compact and accessible format.

Thich Nhat Hanh’s ability to show the Buddha as a person who deals with the same life issues as we do is unique and unsurpassed. Written in language accessible to readers of all ages and levels of experience Thich Nhat Hanh combines the description of the major life stages of the Buddha with his most important teachings. Reaching far beyond the biography genre Path of Compassion is a highly readable and informative introduction to Buddhism.

Thich Nhat Hanh was a world-renowned spiritual teacher and peace activist. Born in Vietnam in 1926, he became a Zen Buddhist monk at the age of sixteen. Over seven decades of teaching, he published more than 100 books, which have sold more than four million copies in the United States alone. Exiled from Vietnam in 1966 for promoting peace, his teachings on Buddhism as a path to social and political transformation are responsible for bringing the mindfulness movement to Western culture. He established the international Plum Village Community of Engaged Buddhism in France, now the largest Buddhist monastery in Europe and the heart of a growing community of mindfulness practice centers around the world. He passed away in 2022 at the age of 95 at his root temple, Tu Hieu, in Hue, Vietnam.