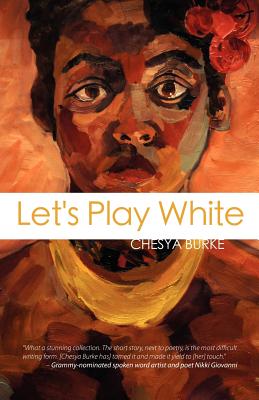 White brings with it dreams of respect, of wealth, of simply being treated as a human being. It's the one thing Walter will never be. But what if he could play white, the way so many others seem to do? Would it bring him privilege or simply deny the pain? The title story in this collection asks those questions, and then moves on to challenge notions of race, privilege, personal choice, and even life and death with equal vigor.

From the spectrum spanning despair and hope in "What She Saw When They Flew Away" to the stark weave of personal struggles in "Chocolate Park," Let's Play White speaks with the voices of the overlooked and unheard. "I Make People Do Bad Things" shines a metaphysical light on Harlem's most notorious historical madame, and then, with a deft twist into melancholic humor, "Cue: Change" brings a zombie-esque apocalypse, possibly for the betterment of all mankind.

Gritty and sublime, the stories of Let's Play White feature real people facing the worlds they're given, bringing out the best and the worst of what it means to be human. If you're ready to slip into someone else's skin for a while, then it's time to come play white.

Blurbs:
"These raw, brutal stories, often with intriguingly open endings, display an odd and unsettling relationships to the poetry of violence. These dark tales announce the arrival of a formidable new master of the macabre."
-Samuel R. Delany, author of Dhalgren and Through the Valley of the Nest of Spiders

"What a stunning collection. Let's Play White... and so on time. Chesya Burke has] touched something special in her] stories. I'm a big Octavia Butler fan and I see a peek of that as well as some latter-day Toni Morrison within these pages]. I see the light and warmth Chesya is] offering. There definitely is magic in that. The short story, next to poetry, is the most difficult writing form. Chesya has] tamed it and made it yield to her] touch."
-Nikki Giovanni, Grammy-nominated spoken word artist and poet

About the Author:
Chesya Burke has published over forty short stories in various venues including Dark Dreams: Horror and Suspense by Black Writers, Voices From the Other Side, and Whispers in the Night, each published by Kensington Publishing Corp. as well as the historical, science, and speculative fiction magazine, Would That It Were, and many more. Several of her articles appeared in the African American National Biography, published by Harvard and Oxford University Press, and she won the 2004 Twilight Tales award for short fiction. Chesya attends Agnes Scott College, where she studies creative writing and the African diaspora as it relates to race, class and gender. Many of these themes find themselves appearing in her fiction.