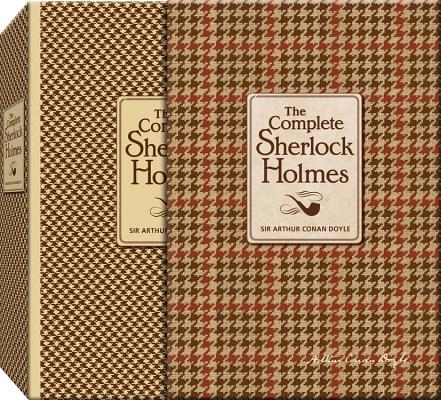 By Sir Arthur Conan Doyle
$35.00
On Our Shelves Now

Part of the elegant Knickerbocker Classics series, The Complete Sherlock Holmes is comprised of 4 full-length novels and 56 short stories featuring the world's most famous pipe-smoking detective. For Sherlock Holmes fans worldwide, this stunning gift edition has a full cloth binding and ribbon marker, all packaged neatly in an elegant slipcase.

Written by Sir Arthur Conan Doyle between the years 1867 and 1927, the legendary Sherlock Holmes employed his mastery of deductive reasoning and expert sleuthing to solve an array of complex and harrowing cases. From his home—221B Baker Street in London—the legendary Sherlock Holmes (accompanied by his loyal companion and chronicler, Dr. Watson) baffled policemen and became famous worldwide for his remarkable observations and even more eccentric habits.

Featuring a foreword from renowned Holmes scholar Daniel Stashower, (author of A Teller of Tales: The Life of Arthur Conan Doyle and Sherlock Holmes in America), The Complete Sherlock Holmes contains every known Sherlock Holmes tale ever written. From Holmes’ first appearance in “A Study in Scarlet” (1887) and The Hound of the Baskervilles (1901–1902), through the collection of stories in the The Case-Book of Sherlock Holmes, this deluxe edition boasts the entire Holmes catalogue.

The Knickerbocker Classics bring together the works of classic authors from around the world. Complete and unabridged, these elegantly designed, cloth-bound hardcovers feature a slipcase and ribbon marker, as well as a comprehensive introduction providing the reader with enlightening information on the author's life and works.

Sir Arthur Conan Doyle (1859–1930) was a Scottish physician and prolific writer of fiction and nonfiction. He is most well known for his four novels and fifty-six short stories featuring the legendary and eccentric detective Sherlock Holmes. Holmes was modeled after Doyle's colleague, physician and surgeon Dr. Joseph Bell, who had been known for his acute powers of deductive observation. In his real life, Doyle worked in the name of justice too. He personally investigated two cases of innocent men who had been wrongfully imprisoned and helped to get them exonerated for their "crimes."