The New Screenwriter's Survival Guide; Or, Guerrilla Meeting Tactics and Other Acts of War (Paperback) 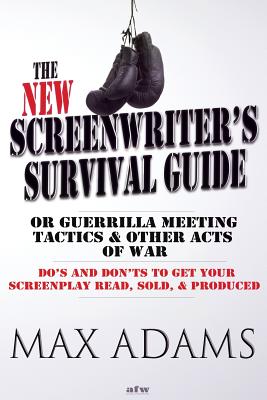 THE NEW SCREENWRITER'S SURVIVAL GUIDE: No one had ever won the world's two hottest amateur screenwriting awards - The Nicholl Fellowship from the Academy of Motion Pictures Arts and Sciences and the Austin Film Festival screenwriting award - in a single week. No one else had ever sold three pitches back to back over the Christmas weekend. And almost no one else had ever made her first sale as a complete unknown from outside California - and gone on to get it produced starring the then hottest young actress in Hollywood. People just don't do that. But Max Adams did. From guerrilla meeting tactics to finding (and firing) your agent, from maintaining "voice" to pitching and getting paid, the screenwriter crowned "red hot" by Variety who has been there, done that, and lived to talk about it tells you how to sell and get your screenplay made. And, more importantly, stay alive and successful for a long time afterward. "This is an accessible, smart, funny, insightful book that I would and will recommend to all scribes who come my way." Richard Walter, UCLA Screenwriting Chairman "Before you even think of marketing your script, read this book and change your screenwriting life." David Trottier, Author, The Screenwriter's Bible "If you want to understand how Hollywood works when you're the new kid on the block, this is the book to read." Greg Beal, Nicholl Fellowships in Screenwriting "Every writer should have Max Adams' advice in their arsenal." Jeanne Veillette Bowerman, Editor, Script Magazine $21.95 US Visit the Book site: http: //screenwriterssurvivalguide.com.

Max Adams is an author and award winning screenwriter. She has written professionally for Columbia Pictures, Hollywood Pictures, Touchstone Pictures, Universal Pictures, Walt Disney Studios, and Tri-Star Pictures. She has lectured and taught at University of Southern California, Squaw Valley Community of Writers, Film Arts Foundation, New York Film Academy, Gotham Writers, University of Utah, and the Academy of Motion Pictures, Arts and Sciences. She is a former Writers Guild of America online screenwriting mentor, is the founder of two international online screenwriting workshops, The Left Door and 5150, is the author of The New Screenwriter's Survival Guide; Or, Guerrilla Meeting Tactics and Other Acts of War, is a University of Utah associate professor and is the founder of the The Academy of Film Writing. Her produced feature film projects include Excess Baggage, The Ladykillers, and One For the Money.