The Coyote's Bicycle: The Untold Story of 7,000 Bicycles and the Rise of a Borderland Empire (Paperback) 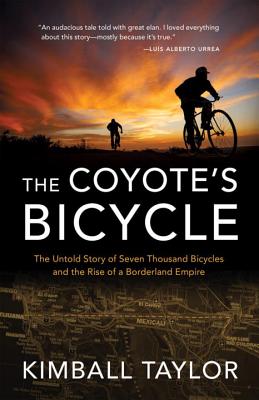 For readers of Jon Krakauer and Susan Orlean, The Coyote's Bicycle brings to life a never-before-told phenomenon at our southern border, and the human drama of those who would cross.

It wasn’t surprising when the first abandoned bicycles were found along the dirt roads and farmland just across the border from Tijuana, but before long they were arriving in droves. The bikes went from curiosity, to nuisance, to phenomenon. But until they caught the eye of journalist Kimball Taylor, only a small cadre of human smugglers?coyotes?and migrants could say how or why they’d gotten there.This is the story of 7,000 bikes that made an incredible journey and one young man from Oaxaca who arrived at the border with nothing, built a small empire, and then vanished.

Taylor follows the trail of the border bikes through some of society’s most powerful institutions, and, with the help of an unlikely source, he reconstructs the rise of one of Tijuana’s most innovative coyotes. Touching on immigration and globalization, as well as the history of the US/Mexico border, The Coyote’s Bicycle is at once an immersive investigation of an outrageous occurrence and a true-crime, rags-to-riches story.

Kimball Taylor is the author of Return by Water: Surf Stories and Adventures, as well as, Drive Fast and Take Chances: Fair Warning from Surfers. He’s a long-time contributor to Surfer Magazine. Taylor has co-authored history books on Pipeline and Jeffreys Bay. Taylor holds a BA in Journalism and a MFA in Creative Writing. He has taught writing courses at San Diego State University and is an alumnus of The Squaw Valley Community of Writers.

Just when you think you know every border story imaginable, Kimball Taylor shows up with this book of madness. It's an audacious tale told with great elan. I loved everything about this story—mostly because it's true. Can one bicycle change the world? Maybe not, but Kimball Taylor knows with love, no border is impermeable.

Journalist Taylor deftly guides readers over la frontera and back again, many times, to unravel the story behind the thousands of bikes of all shapes and sized abandoned over the years along the Mexican-U.S. border . . . .  a place that''s as complex as it is enchanting.
— Publishers Weekly

Kimball Taylor’s gift at capturing human stories in a manner as captivating as fiction transforms this Quixotic journey into a landmark work on the recent history of human smuggling into the United States.

Kimball Taylor brings us along on a deeply researched and richly detailed journey to our southern border, and in the process enlightened me with every turn of the page. The Coyote's Bicycle is not unlike a swift downhill mountain bike ride through no-man's land.

— Eric Blehm, New York Times Best Selling Author of Legend, Fearless, and The Only Thing Worth Dying For

What an improbable, richly peopled saga! Kimball Taylor follows his hunch so deep into the world of polleros and the borderlands where they do their human smuggling that you’ll forget you’re reading non-fiction. El Indio, his clients, the authorities, and the harsh country they all do battle with—not to mention all the merry, ubiquitous bicycles rolling through the story—this completely original concoction reads like Latin American magical realism, except it’s reported-out and grounded in fact. Wonderful stuff.

— William Finnegan, author of Barbarian Days: A Surfing Life and Cold New World: Growing Up in a Harder Country