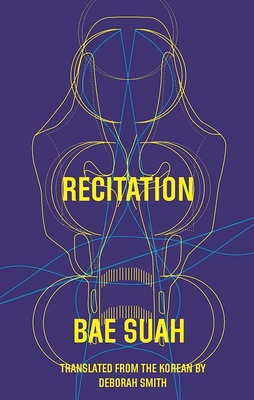 Bae Suah offers the chance to un-know--to see the every-day afresh and be defamiliarized with what we believe we know--which is no small offering.--Music & Literature

The meeting between a group of emigrants and a mysterious, wandering actress in an empty train station sets the stage for Recitation, a fragmentary yet lyrical meditation on language, travel, and memory by South Korea's most prominent contemporary female author. As the actress recounts the fascinating story of her stateless existence, an unreliable narrator and the interruptions of her audience challenge traditional notions of storytelling and identity.

Bae Suah, born in Seoul in 1965, is one of the most highly acclaimed contemporary Korean authors, with over ten short story collections and five novels to her name. She received the Hanguk Ilbo literary prize in 2003, and the Tongseo literary prize in 2004. She has also translated several books from the German, including works by W. G. Sebald, Franz Kafka, and Jenny Erpenbeck. Nowhere to be Found, translated by Sora Kim-Russell, was the first of her books to appear in English, and was longlisted for a PEN Translation Prize and the Best Translated Book Award. Deborah Smith received a PhD in contemporary Korean literature at SOAS (University of London) in 2016. Her literary translations from the Korean include two novels by Han Kang (The Vegetarian, which won the 2016 Man Booker International Prize, and Human Acts), and two by Bae Suah, (A Greater Music and Recitation). She also recently founded Tilted Axis Press to bring more works from Africa, Asia, and the Middle East into English. She lives in London.