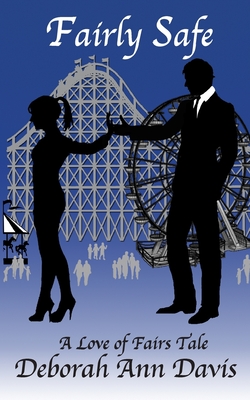 This is book number 2 in the Love of Fairs series.

JACOB HAS COME A LONG WAY FOR AN ORPHANED KID. He has a mentor, a great job, and has finally fallen in love. Granted, she mistook him for a stalker when they met, but every relationship has its little problems. Unfortunately, for the past few years, when the object of his affection pops in and out of his life, she has refused to share any personal info, like where she's from, or her real name. Nevertheless, Jacob is ready to take their relationship to the next level. Now, if only he can locate her so he can tell her.

CASEY'S FAMILY IS IN THE WITNESS PROTECTION program. Safety has to be their only priority. Their cover has been blown before, so at any given time they could be forced to disappear again. A shy young man with hopeful eyes cannot possibly be added to the mix. Now, if only she can stop thinking about him.

JACOB'S AND CASEY'S WORLDS UNEXPECTEDLY COLLIDE when Jacob inadvertently helps hide her family. In keeping with their 24-7 vigilance, Jacob must come up with a plan to keep them out of harm's way, because this time if Casey disappears, she will be taking Jacob's heart with her, and his hopes of finally having a family of his own.

Jacob Kent stepped out of his car as he scanned the fair on the other side of the parking lot, his heart pounding. First, he'd walk through the fair to familiarize himself with the layout they had printed out. Then he would adjust their escape route to where he had parked the car. After assessing the grounds, he would plant himself somewhere along the concourse, and watch the crowd. That's how he had always found Casey in the past, and that's how he was going to find her again.

A voice came over the loudspeaker, momentarily dimming the carnival noise. "Would the owner of a red ford truck, license plate LOF537, please return to your vehicle? Your lights are on."

Jacob tensed. Was that some kind of clue? He looked over the parking lot. No, he could see the lights of the red truck from here. He smiled ruefully to himself.

Get a grip, Kent, he thought as he watched a portly balding man ooze exasperation as he marched toward the truck.

Intellectually, he had to acknowledge they might have pieced together a bunch of randomly forgotten items into a fantastical story, but emotionally, he couldn't help but believe the items were a series of clues serving an ultimate purpose. If The Herd was here, he was going to find them. Even so, if he wasn't careful, he could spend the entire day jumping at shadows and following dead ends.

Like that little commotion over by the edge of the fair. To his over-active imagination, that game of tag could look like a child trying to escape from the evil clutches of--

His head jerked up. As the pounding drums from the familiar song drowned out the carnival music, all doubt was erased. The loudspeaker was sending out a warning. His eyes darted back toward the commotion he had noticed, the truth clamping his throat.

That was no game of tag. That was a child trying to escape a man in hot pursuit. Jacob couldn't be positive at this distance, but it sure looked like Robin.

With his heart in his throat, he broke into a run, zigzagging between cars, trying to intercept the fleeing youngster. In this surreal moment, the same song they had used for obstacle course training was being piped out like background music to a scene in an action movie. But this scene was real, where a real menace was gaining on his quarry. Caught in his own nightmare, Jacob couldn't get close enough to help.

DEBORAH ANN DAVIS writes Quirky New/Young Adult Fiction with a Twist. An award-winning author, speaker and personal trainer, she is popular with students, parents, readers and authors alike. With an insightful and quirky approach to life, she shares life lessons with wit and compassion. Twelve years after their first kiss, she reunited with, and married her childhood sweetheart. Together they coached their daughter's AAU Basketball Team, which swept States two years in a row. (Yay!) Then, for several years, their daughter and their money went to college. During a particularly nasty bout of Lyme disease, Deborah turned to Fitness to boost her Health, and to Writing to boost her Happiness. Currently, she is a healthy and happy Educational Speaker and a Certified Personal Trainer who loves to write. They presently reside on a lovely lake in Connecticut. When she’s not writing novels for her Love of Fairs series, she enjoys dabbling with living a sustainable life, dancing, playing outside, and laughing really hard every day.

One of the problems of publishing a sparkling debut novel is that of producing a follow up that is better or even as good. I am pleased to be able to report that Deborah Davis of “Fairly Certain” fame has surmounted this problem with what appears like great ease. Ms Davis’s first effort, “Fairly Certain” was – is – a highly polished, sparkling gem of a book. Her follow up, “Fairly Safe,” is an even more highly polished, highly sparkling bigger and brighter gem which encompasses all the shining facets of “Fairly Certain:” romance, humour, enigma, intrigue, human frailty and well intentioned deceit resulting in hopeless confusion. But has the additional ingredients of a genuine criminal threat to the lives of three delightful young people and close knit family involvement. This is a powerful, well mixed recipe and the result is a disbelief suspending roller coaster romp of a read that grabs the reader on page one and whisks he or she on a thrilling super fast ride of highs and lows to a gloriously happy ending. “Fairly Safe” made me laugh, it kept me in suspense, it kept me wondering where it was going and – dare I admit it? – in its closing chapters it even had my eyes filling up with tears. Ridiculous. “Fairly Safe” is, I suppose, aimed mainly at the young adult market but if it can entertain a guy like me in his sixties it must be good for all. Full marks to Ms Davis. “Fairly Safe” is worth five stars. No doubt about it at all. by D. A. Barker

Fairly Safe is a novel which is a fun-filled romp full of laughter, love, and mystery. I found myself laughing out loud at the antics of the siblings, Jacob, William, and their household staff; a staff which author Deborah Ann Davis masterfully integrated into family. As a result, Ms. Davis skillfully presented the fact that blood does not make a family.
In addition, Ms. Davis had more than a few plots in this novel which she skillfully brought together. Furthermore, the story-line in Fairly Safe was original and refreshing as she led us from one point to another. As a result, I wanted to read this novel straight through. Most noteworthy is Ms Davis’ talent of keeping the mystery, intrigue, romance, and secrets at top peak. Consequently, the book held my interest in characters which I felt I knew and had to come to love.
Her characters are lovable and feel real to the reader. Fairly Safe is a feel good read which is well-written and developed. I gave a long and heartfelt sigh as I finished this book. Ms. Davis is a talented writer with the imagination and talent to grab the reader and keep them enthralled. Consequently, I was not ready to say goodbye to Cassie, Jake, and the gang. RECOMMENDATION FOR Fairly Safe: 5 STARS by Vera Mallard at Vera’s Book Reviews and Stuff

I did enjoy the book and characters…The story and characters were real, honest, raw, compelling, intriguing, and mysterious too. by The Reading Machine on Goodreads