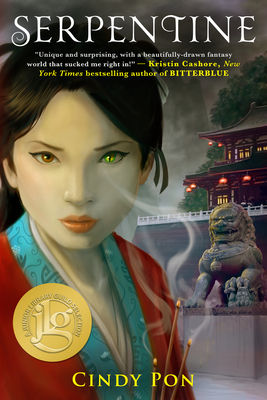 "After discovering she's a serpent demon, Skybright struggles to navigate friendship, love, and her own darkly shifting identity. A richly imagined world and an unforgettable heroine make this a story that fantasy fans won't want to miss."

Inspired by the rich history of Chinese mythology, this sweeping fantasy is set in the ancient Kingdom of Xia and tells the coming of age story of Skybright, a young girl who worries about her growing otherness. As she turns 16, Skybright notices troubling changes. By day, she is a companion and handmaid to the youngest daughter of a very wealthy family. But nighttime brings with it a darkness that not even daybreak can quell. When her plight can no longer be denied, Skybright learns that despite a dark destiny, she must struggle to retain her sense of self – even as she falls in love for the first time.

Cindy Pon is a writer and a longtime student of Chinese brush painting. She is the author of Fury and the Phoenix and Silver Phoenix, which was named one of Booklist’s Top Ten Fantasy and Science Fiction Books for Youth, and one of 2009's best Fantasy, Science Fiction and Horror by VOYA. She lives in Southern California.

“The economical narrative conjures an entire world, drenched in color and texture and scent, rich in evocative mythology and heady action, and filled with vivid characters . . . A fast-paced and engrossing read for anyone weary of the same old hackneyed storylines.”  —Kirkus Reviews

"Serpentine's world oozes with lush details and rich lore, and the characters crackle with life. This is one story that you'll want to lose yourself in."  —Marie Lu, author, Prodigy

"Serpentine is unique and surprising, with a beautifully-drawn fantasy world that sucked me right in! I love Skybright's transformative power, and how she learns to take charge of it.”  — Kristin Cashore, author, Bitterblue

“YA fans will love Pon's storytelling ability and the immersion into a world filled with love, danger, and fantasy. Readers will be begging for a sequel to find out what happens to these intriguing characters.”  —School Library Journal