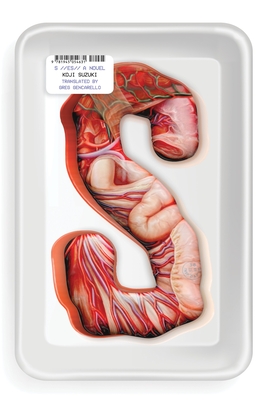 Twenty-one years after the legendary bestseller Ring, which spawned blockbuster films on both sides of the Pacific, and thirteen years after Birthday, the seeming last word on iconic villain Sadako and her containment, internationally acclaimed master of horror and Shirley Jackson Award-winner Koji Suzuki makes his much-awaited return to the famed trilogy’s mind-blowing story world with a new novel, S.
Takanori Ando, son of Spiral protagonist Mitsuo, works at a small CGI production company and hopes to become a filmmaker one day despite coming from a family of doctors. When he’s tasked by his boss to examine a putatively live-streamed video of a suicide that’s been floating around the internet, the aspiring director takes on more than he bargained for. His lover Akane, an orphan who grew up at a foster-care facility and is now a rookie high-school teacher, ends up watching the clip. She is pregnant, and she is…triggered.
Sinking hooks into our unconscious from its very first pages with its creepy imagery, and rewarding curious fans of the series with clever self-references, here is a fitting sequel to a tale renowned for its ongoing mutations.

Koji Suzuki was born in 1957 in Hamamatsu, southwest of Tokyo. He attended Keio University where he majored in French. After graduating he held numerous odd jobs, including a stint as a cram school teacher. Also a self-described jock, he holds a first-class yachting license and crossed the U.S., from Key West to Los Angeles, on his motorcycle. The father of two daughters, Suzuki is a respected authority on childrearing and has written numerous works on the subject. He acquired his expertise when he was a struggling writer and househusband. Suzuki also has translated a children's book into Japanese, The Little Sod Diaries by the crime novelist Simon Brett. In 1990, Suzuki's first full-length work, Paradise won the Japanese Fantasy Novel Award and launched his career as a fiction writer. Ring, written with a baby on his lap, catapulted him to fame, and the multi-million selling sequels Spiral and Loop cemented his reputation as a world-class talent. Often called the "Stephen King of Japan," Suzuki has played a crucial role in establishing mainstream credentials for horror novels in his country. He is based in Tokyo but loves to travel, often in the United States. Birthday is his sixth novel to appear in English.